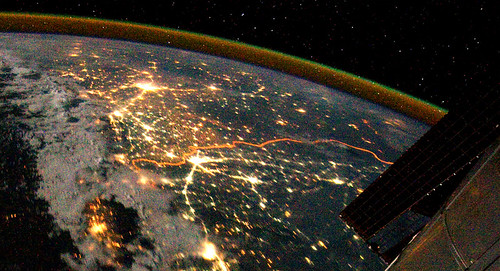 There’s no better vantage point than space to see the expansive beauty of the planet and the interconnectedness of the human race. However, even getting hundreds of kilometers above Earth isn’t far enough away to blur some of the ugly sides of life and the divisions we create between each other.Take, for instance, the man-made border between India and Pakistan.

These two countries are at such odds that they’ve erected a physical, militarized border which remains lit by floodlights at night to prevent ammunition trafficking and terrorist crossings.

There’s such a bright, orange glow along the border that the 2,900-kilometer (1,800 mi) demarcation line is easily pinpointed from the ISS. The border covers a variety of terrain, including cities and deserts, yet is amazingly lit the entire length.

Over the past decades, the India-Pakistan border has been one of the most dangerous places in the world, plagued by lawlessness, violence, and deadly drone strikes.