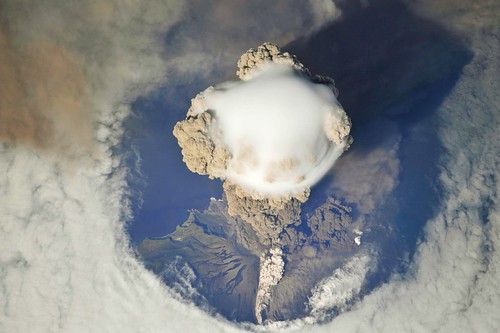 Although we’d expect to see massive volcanic eruptions from space, it’s somewhat surprising to find out that around 50 to 60 eruptions happen on the planet each year and, on any given day, orbiting astronauts can look down on Earth and see a plume of ash and steam rising from one of these natural chimneys.

Occasionally, even a volcano’s hot, glowing magma is visible from heights far above the stratosphere.

The Sarychev volcano (seen above) in the northwest Pacific Ocean is one of the most active volcanoes in the world and has erupted eight times since 1946.

In the 2009 eruption, shock waves opened a hole in the clouds above the blast, allowing astronauts to get an amazingly clear photo of the phenomenon.

Some of the other most active volcanoes on the planet are Mount Stromboli in Italy, Mount Etna in Italy, and Mount Yasur in Vanuatu, all three of which have been continuously erupting for hundreds, even thousands of years.