The Moon Is Shrinking. Are We Destroying It?

Gravity from the Sun and moon work together to give us tides here on Earth. And in return, Earth’s gravity is cracking the moon’s surface. Sorry to be the one that told you this, but the moon is shrinking.

Scientists have a pretty good idea of how the Moon formed. The current theory is that about 4.5 billion years ago, a Mars-sized object, called Theia, collided with the Earth, ejecting material into space. This material then collected over what was left of Theia’s core, forming Earth’s only natural satellite. Unfortunately…we are slowly crushing it.

For most of us, the moon is a cold, unchanging structure pitted with craters from impacts. However, current images of its surface prove that it is much more active than previously thought.

Distributed throughout its entire surface are over 3,000 lobate scarps, which are thrust faults indicative of compression. There is a pattern in the orientation of these lobate scarps, suggesting that there is some outside influence.

The surface is pushed together by internal forces,

said Thomas Watters ~ lead author of the study detailed in the journal Science.

When it breaks, it literally thrusts material upward because the surface is contracting. That contraction, we think, is coming from internal cooling of the moon. We now know that’s a global process, so it means the moon is shrinking globally ? very likely because it is continuing to cool.

Thrust faults form when one block of crust slides up another and are commonly found on Earth in mountain ranges such as the Himalayas, but they’re also found on Mercury! Mercury’s globally distributed fractures suggest the planet’s mantle has cooled, shrinking its interior and distorting the crust.

Similar structures have been found on the moon, captured in images from NASA’s Lunar Reconnaissance Orbiter.

Since the Apollo missions were designed to land men on the moon, coverage from the Apollo photography was very limited, and only in the portion of the equatorial zone,

We found that these landforms occur not only elsewhere in the equatorial zone, but also at high latitudes,

At least half of the 14 that we report on were at latitudes higher than 60 degrees. Several of them are near the lunar poles.

To date, nearly three-fourths of the moon’s surface has been imaged, showing us smaller versions of the scarps found on Mercury…but with one big difference. Earth’s gravity is affecting how these scarps are appearing on the moon’s surface. Without our gravity, the lobate scarps would be evenly distributed with random orientations, but that’s not what we see! 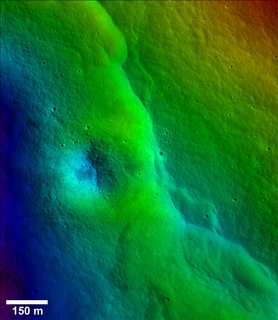 
Instead, near the equator and mid-latitude regions, most of the scarps were oriented north-south, whereas at the poles they were mostly east-west. Researchers say that these findings are consistent with the Earth’s gravitational tidal forces affecting the moon’s surface.

The age estimation comes from the scarps appearing to cut across small craters. Because the moon is constantly bombarded by meteors, the small craters are usually replaced by larger ones relatively quickly. So, if the lobate scarps are cutting through these young craters, they must have formed later in time.

We don’t see any impact craters superimposed on them,

They have not been partially obliterated by impact craters that have hit them, so this tells us that they are very young. Features of this size would not be expected to survive very long un-degraded on the lunar surface, simply because they would typically be obliterated by impact.

So then what is the fate of our moon? Well, if the moon continues to cool and contract, it is likely to form new lobate scarps, likely following the same pattern of orientations. The shrinking size, roughly 100 meters over the last billion years, is unnoticeable to us.

Over a billion years, a 100-meter change in the radius is not very much,

The moon is not shrinking so much that you would ever detect it, and it’s not going to shrink away. There are other planets, like Mercury, that have a lot more contraction.

As the moon continues to get further from us every year, its decrease in angular size will far outweigh its change in physical size. Of course, in about 5 billion years when the Sun burns through the hydrogen in its core, it will expand into a red giant. And at that point, the moon’s compression will be the least of its worries.

Do you think we have a chance of surviving when that time comes? Let us know in the comments.