The First Exoplanet was Discovered 100 Years Ago?

When astronomers found two planets orbiting a pulsar in 1992, it was considered the first definitive detection of planets outside our solar system.

But new research reveals that, nearly a century ago, a young astronomer discovered evidence of an extrasolar planetary system — he just never realized it at the time.

His name was Adriaan van Maanen, a Dutch astronomer at the Mount Wilson Observatory near Los Angeles.

In 1917, he discovered one of the first white dwarf stars, and the nearest to our Sun, only 14 light years away. The star was named “van Maanen 2.”

Now, new research by Ben Zuckerman — a physics and astronomy professor at UCLA, and one of the world’s leading authorities on white dwarfs — reveals that with 20-20 hindsight, it is now possible to say that the first observational indication of the existence of exoplanets is buried within the notes of van Maan’s discovery.

Zuckerman reached this conclusion, which he describes as a “true eureka moment,” when reviewing historical data in preparation for a symposium talk this past July.

As the Physics arXiv Blog explains:

The photosphere of a white dwarf should contain only hydrogen and helium, which is what the spectra of a standard white dwarf shows. Anything else that falls into the star should rapidly sink beneath the surface and so be unlikely to show up.

But the spectrum of van Maanen 2 contains evidence of all kinds of heavier elements. In recent years, Zuckerman and other astronomers have shown that these elements can only come from rocky debris orbiting the star. In other words, these elements come from asteroids regularly falling into their parental white dwarf and burning up.

These elements show up in the spectra of lots of white dwarfs. Indeed, various studies of the spectral characteristics of this debris have revealed the make-up of asteroids orbiting other stars for the first time. 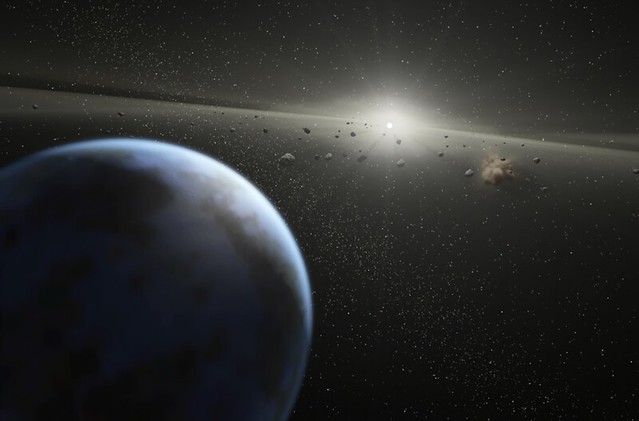 One question that Zuckerman and others have puzzled over is why asteroids are regularly falling into white dwarfs. And this has led them to a fascinating discovery.

It turns out that all of these white dwarfs are surrounded by rocky debris and at least one large planet.

It is the gravitational perturbations from this planet that cause the asteroids to collide with each other and then spiral into their parent star….

When [astronomers] find white dwarfs with heavy elements in their spectra, they now consider this good evidence of an extrasolar planet.

So looking back, van Maanen’s observations were the first evidence that other planets must be orbiting other stars