The Closest ‘Habitable’ Exoplanet Wolf 1061c Is Just 14 ly Away

Australian astronomers have spotted the closest exoplanet within the habitable zone of its star to Earth, dubbed Wolf 1061c, is just 14 light years away.

We now that small rocky planets are abundant throughout the galaxy, as well as the multi-planet systems appear to be common. However, most of the rocky planets we’ve discovered so far are hundreds or even thousands of light years away. An exception is Gliese 667Cc, an exoplanet discovered back in 2011, located 24 light years away from us in the constellation of Scorpius, orbiting Gliese 667 C, which is a member of the Gliese 667 triple star system. This is why the discovery of Wolf 1061c is so particularly exciting.

Wolf 1061c is located in the constellation Ophiucusmore orbiting its host star, formally called Wolf 1061 (which is also the 36th nearest stars to Earth) every 18 days. Wolf 1061 is a red dwarf “M-type” star a small, relatively cool and stable star just 14 ly away (I know I’ve said that before). The star system consisting of 3 planets Wolf 1061 b, c and d having periods of 4.9 days, 17.9 days and 67.2 days. All 3 planets are categorized as super-Earths, with their masses at least 1.4, 4.3 and 5.2 times that of Earth, respectively.

It is a particularly exciting find because all three planets are of low enough mass to be potentially rocky and have a solid surface, and the middle planet, Wolf 1061c, sits within the ‘Goldilocks’ zone where it might be possible for liquid water—and maybe even life—to exist,

says Dr Wright ~ lead author of the study, will be published in The Astrophysical Journal Letters.

It is fascinating to look out at the vastness of space and think a star so very close to us—a near neighbour—could host a habitable planet.

While a few other planets have been found that orbit stars closer to us than Wolf 1061, those planets are not considered to be remotely habitable, 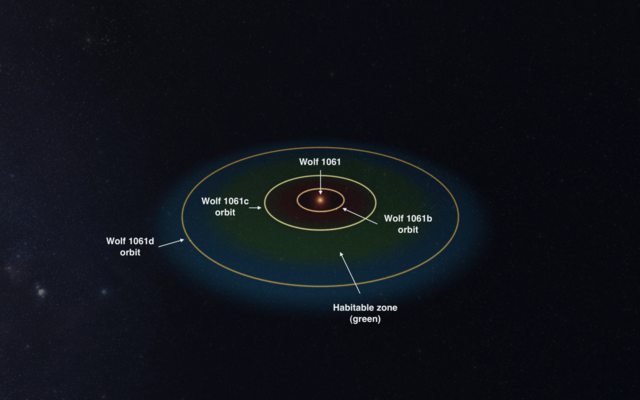 A simulation of the orbital configuration of the Wolf 1061 system. © Made using Universe Sandbox 2 software from universesandbox.com

The close proximity of the planets around Wolf 1061 means there is a good chance these planets may pass across the face of the star. If they do, then it may be possible to study the atmospheres of these planets in future to see whether they would be conducive to life,

This proximity to the star means that Wolf 1061c is likely to be ‘tidally locked’, which means one side will always be facing its star. This changes the circumstances on the surface of the planet substantially,

You have one very hot side and one very cool side.

The next step will be for telescopes to look at Wolf 1061 and search for “transits” of the planets in front of the star. This will allow scientists to find out more about this planetary system.

I think once people have had a good look at the data and get to grips with what we’re saying, I think they will be pretty pleased with the detection. In fact, I imagine there will be a number of telescopes pointed at the star in the near future, hoping that it in fact transits. And we can start to do atmospheric detections.

So if we are lucky in the near future we could find many, many more planets and start to investigate the atmospheric properties of these types of planets. And maybe, just maybe, discover the presence of life on some of these exoplanets.