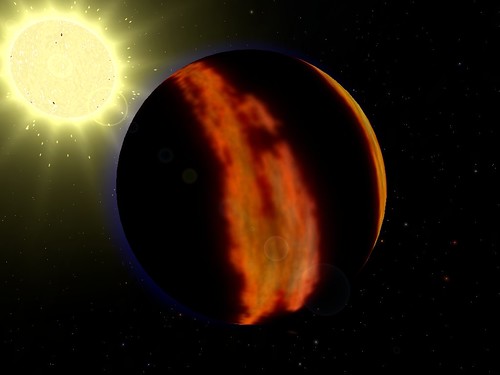 Nick-named Bellerophon, in honor of the Greek hero who tamed the winged horse Pegasus, this gas giant is over 150 times as massive as earth and made mostly of hydrogen and helium. The problem is that Bellerophon roasts in the light of its star at over 1800 degrees F (1000 degrees C).

Bellerophon’s star is over 100 times closer to it than the Sun is to Earth. For one thing, this heat creates an extremely windy atmosphere. As the hot air rises, cool air rushes down to replace it creating 1000 km per hour winds. The heat also ensures that no water vapor exists. However, that does not mean there is no rain.

This leads us to Bellerophon’s main quirk. Such intense heat enables the iron composing the planet to be vaporized. As the vapor rises it forms iron vapor clouds, similar in concept to water vapor clouds here on Earth.

The difference though, is that these clouds will then proceed to rain a relentless fury of molten iron down upon the planet (…don’t forget your umbrella).