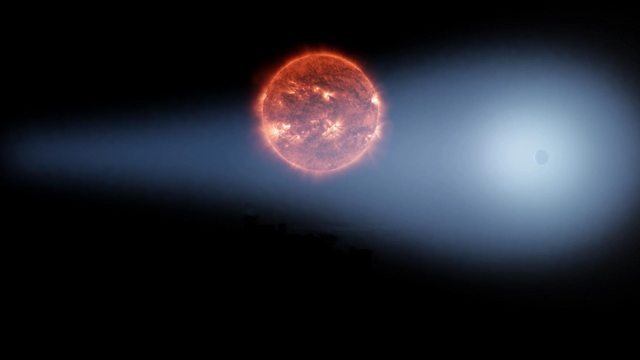 Artist’s concept of Gliese 436b ©Mark Garlick/University of Warwick.

Now, this next planet doesn’t have wicked winds, in fact, it doesn’t even look like your average planet, thanks to a cloud of hydrogen gas that follows it around like a comet’s tail. But astronomers didn’t know this when they first discovered the planet: Gliese 436b.

It wasn’t until they looked at the planet in ultraviolet light that they were able to figure out what was going on. Gliese 436b orbits a red dwarf, and it’s so close to the star that it orbits every 2.6 days. Because the two are so close to each other, the star heats the planet’s atmosphere to the point where the hydrogen gets all excited and starts to escape.

But once the hydrogen gets into space, it starts to cool off and condense into a cloud. Now, you might think that radiation from the star would push the hydrogen cloud away. But this red dwarf is too weak to do that. So the cloud gets pulled along by the planet, stretching the cloud into a tail as it circles the star.

Plus, with all the hydrogen escaping the atmosphere, Gliese 436b is left with heavier molecules, which start to bond in extreme ways because of the hot temperatures and powerful gravity. Scientists think that the conditions might be just about right to make a special kind of water called Ice X.

Water, as you and I know, is just hydrogen and oxygen, right? And when those molecules of H2O get cold enough, we end up with the average, everyday kind of ice. But Ice-X is different. To make it, intense pressures have to force those molecules into an extremely tight configuration, which lets the ice stay solid at temperatures over 400°C.

So basically, astronomers believe that Gliese 436b may be covered in … hot ice.