Tatooine-Like Planets With Twin Sunsets May Be Common In Universe

That image of Luke Skywalker staring out from his home planet of Tatooine in Star Wars: Episode IV – A New Hope is iconic. This is mostly because you see Luke staring up at two sunsets, which we all know can’t happen in real life. Or could it?

According to a new study published in the Astrophysical Journal, Earth-like, solid planets such as Tatooine – which is part of a binary star system, explaining for the double sunset – likely exist and may be widespread across the Universe.

Until now, it was thought that only uninhabitable gas planets orbited two suns. Experts believed that the gravitational pull of two sun-like stars would create such a choppy atmosphere that dust and rock would not be able to gently collide to form larger planets.

But the new findings suggest that larger, rocky planets could in fact form around two suns. The study by Ben Bromley, of the University of Utah, and Scott Kenyon, of the Smithsonian Astrophysical Observatory, led the men to conclude that Tatooine sunsets “may be common after all”.

“Our main result is that outside a small region near a binary star, (either rocky or gas-giant) planet formation can proceed in much the same was as around a single star. In our scenario, planets are as prevalent around binaries as around single stars.”

In their study, researchers used complex mathematical formulas to describe how binary stars can be orbited by planetesimals – asteroid-sized rocks that clump together to form planets. 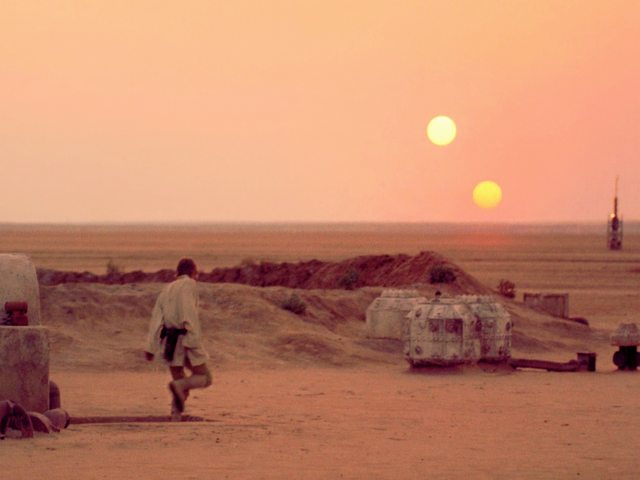 The researchers didn’t conduct their simulations to the point of planet formation. However, they did show that planetesimals could survive without collisions for tens of thousands of years in concentric, oval-shaped orbits around binary stars.

The focus of their simulations was Kepler-16b, a planet discovered in 2011, which was found to be in the habitable zone of its parent stars – the region of space around the stars where the planet would receive enough energy for their to be liquid water on its surface.

Despite the headlines proclaiming otherwise at the time, though, Kepler-16b is too large to actually be like Tatooine. It’s roughly one-third the mass of Jupiter, and thus over 100 times more massive than Earth. It’s location in the habitable zone, though, could mean that it’s more like Yavin, a gas giant planet with a habitable moon.

Based on Bromley’s research, which moved Kepler-16b’s orbit a bit closer to Earth’s, missions like Kepler, and perhaps TESS and the James Webb Space Telescope, may soon be discovering planets that can truly be compared to Luke Skywalker’s homeworld.

In the hunt for alien life, NASA’s Kepler space telescope has already discovered more than 1,000 planets orbiting other stars, including some rocky planets in the so-called habitable zone – the Goldilocks area that’s just right for life. Even our own Milky Way harbors thousands of potentially habitable planets. So far, Kepler has found seven planets orbiting within or near the habitable zone around binary stars, but all of them are gas giants.

“The planets that Kepler has discovered so far around binary stars are larger, Neptune- or Jupiter-sized gas giants,” Bromley said. “None of those found so far are small and rocky like our Earth – or like Tatooine in ‘Star Wars.'”

However, that doesn’t mean scientists are giving up. They will continue the search for habitable planets like Tatooine, and hope that maybe the fantastical world of ‘Stars Wars’ one day will become a reality.

The study was funded by NASA’s Outer Planets Program and was a spinoff of Bromley’s and Kenyon’s research into how dwarf planet Pluto and its major moon, Charon, act like a binary system. Both are orbited by four other moons.