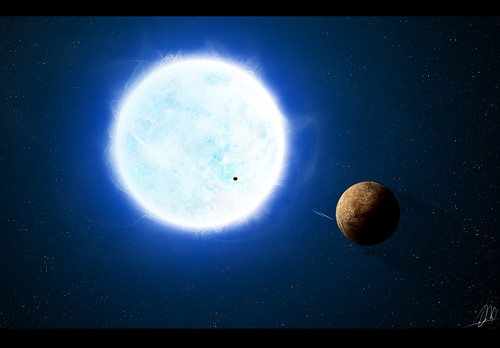 Stars with a smaller mass become white dwarfs. Their core shrinks to become a white dwarf while their outer layers are planetary nebulae. White dwarfs are small, dense and strangely faint. Astronomer Willem Jacob Luyten gave them this name. White dwarf stars are composed of electron degenerate matter. They are usually formed out of carbon and oxygen. If their temperature has fused carbon to neon, an oxygen-neon-magnesium white dwarf is formed. The electron degeneracy pressure causes white dwarfs to become dense. As they lack any source of energy, these initially hot stars, on radiating all their energy, cool down. White dwarfs have a mass comparable to that of the Sun and volume comparable to that of the Earth. After the depletion of all its energy, a white dwarf enters the ‘dark dwarf’ stage.