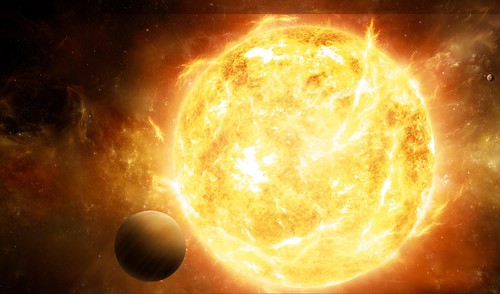 The temperature at the core of the star slowly rises because the star emits energy. Hydrogen gets converted into helium by the process of nuclear fusion. When the hydrogen in the core depletes, the core loses stability. The temperature and pressure continue to rise. At this stage the temperature and pressure are so high that helium can fuse to carbon. This can be referred to as helium burning. The star then starts glowing red, thus entering the red giant phase. Very large red giant stars are known as Super Giants.

They are magnanimous in size (have diameters about 1000 times that of the Sun) and have very high luminosities. The path taken by a star after this phase depends on its mass. It will become a neutron star, a white dwarf, black dwarf or a black hole.