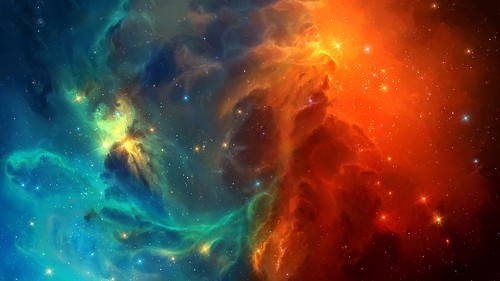 Stars are born in the nebulae. The matter contained in the nebula determines the mass of the star. Nebulae are clouds of gas and dust in space. The particles stay together due to their own gravitational forces. Nebulae may be formed due to gravitational collapse of gas in the ISM. Gravitational collapse refers to inward fall of a body under its own gravity. Some nebulae are formed from supernova. Here, the particles thrown during the explosion ionize and come together, forming a nebula. Clouds of dust and gas (majorly hydrogen) may be stirred by a passing star, which causes the particles to come closer together. This causes the matter in the nebula to concentrate towards one central point, which becomes the center of mass of the new star. Depending on the amount of matter, a dwarf or a new star is formed. The critical mass for the formation of a new star is around 80 times the mass of Jupiter.
Nebulae are of different types. Emission nebulae emit light (electrons from hydrogen atoms combine with protons, giving out red light in the process). Reflection nebulae glow (dust particles in them reflect light from the stars). Many just remain suspended in space for years, while others are able to see a new star born!