A team of scientists using ground-based telescopes in the USA has discovered a unique planetary system orbiting a neighbor star, HD 7924, a mere 54 light-years away.

By detecting the wobble of HD 7924 — planet’s effect on the star it orbits — astronomers found these planets. All super-Earths, seven to eight times as massive as our own planet, are orbiting at a distance closer than Mercury orbits the Sun, which mean that the probability of life existing there is negligible, they are too hot to support life.

The three planets are unlike anything in our solar system, with masses 7-8 times the mass of Earth and orbits that take them very close to their host star.

In 2009 scientists at the W.M. Keck Observatory detected the first evidence of planets orbiting HD 7924. But now, after five years of additional observations, researchers using data from the robotic telescopes at the Lick Observatory & the Fairborn Observatory in order to assure the validity of these three exoplanets (HD 7924 b,c and d).

What’s hot about this finding?

This discovery marks the first time robotic telescopes — Automated Planet Finder (APF) Telescope at Lick Observatory in California — have been successfully used to find such planets.

This level of automation is a game-changer in astronomy.

It’s a bit like owning a driverless car that goes planet shopping.

The new Automated Planet Finder’ facility offers a way to speed up the planet search, tracing their orbits quickly every clear night without any human oversight.

We initially used APF like a regular telescope, staying up all night searching star to star.

The idea of letting a computer take the graveyard shift was more appealing after months of little sleep. So we wrote software to replace ourselves with a robot. 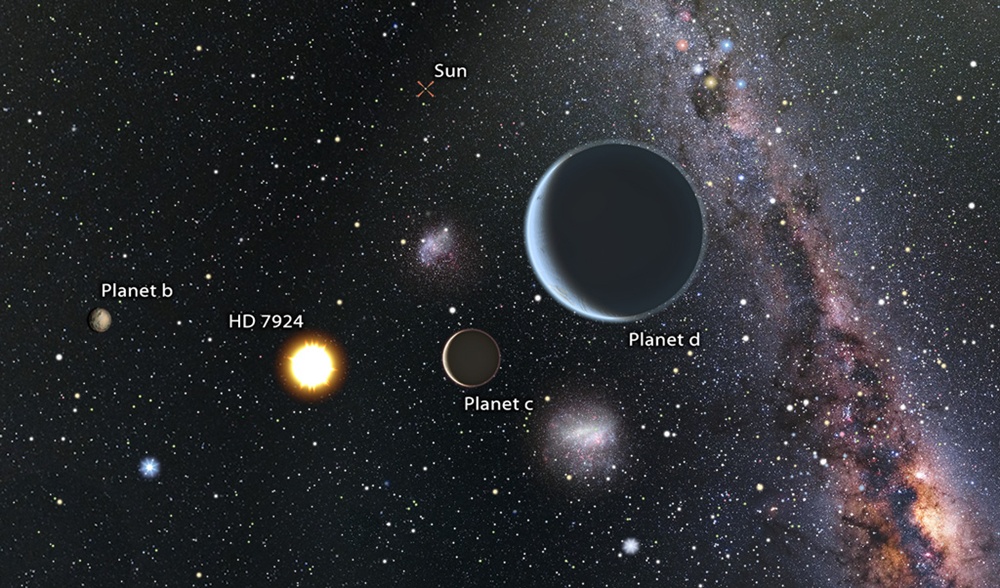 Artist’s impression of a view from the HD 7924 planetary system. © Karen Teramura and BJ Fulton, UH IfA.
Click to zoom

NASA’ Kepler telescope has discovered thousands of exoplanets to date and many more additional planet candidates — it is estimated that there are billions of planets in our galaxy. These new world are vary from small, rocky hot worlds — relatively hospitable surface conditions — to planets a lot like Earth. However, these new dicovered exoplanets are nothing like we have in our solar system.

Observations by APF, APT, and Keck Observatory will help astronomers to find and verify planetary systems around many nearby stars in the coming years.

Starspots, like sunspots on the Sun, can momentarily mimic the signatures of small planets. Repeated observations over many years allowed us to separate the starspot signals from the signatures of these new planets.

When the survey is complete, we will have a census of small planets orbiting Sun-like stars within approximately 100 light-years of Earth.