Earlier, only four entities in our solar system were known to possess rings; all of them are planets. Saturn is obviously the most prominent name in the list; it is joined by three other planets Neptune, Uranus and Jupiter, each of which has rings made up of dust and gas encircling them.

But now, MIT scientists have spotted planetary rings in new regions of the solar system: Chiron (a minor planet on the outskirts of the solar system first discovered in 1977). The latest study indicates that this small celestial body also possesses a separate system of highly active rings that rotate around the sun.

The first ringed minor planet to be found is Chariklo, which belongs to a strange category known as centaurs. These rocky objects (currently estimated at over 44,000 in our solar system, most of them reside between the orbits of Jupiter and Pluto) exhibit features of asteroids and comets. The newly recognized potential ring system is associated with another centaur known as Chiron. Prior to the discoveries of the material around Chariklo and Chiron, centaurs were considered to be inactive little worlds.

“It’s interesting, because Chiron is a centaur — part of that middle section of the solar system, between Jupiter and Pluto, where we originally weren’t thinking things would be active,” said Amanda Bosh , a lecturer with the Department of Earth, Atmospheric and Planetary Sciences at the Massachusetts Institute of Technology. “It’s turning out things are quite active.” 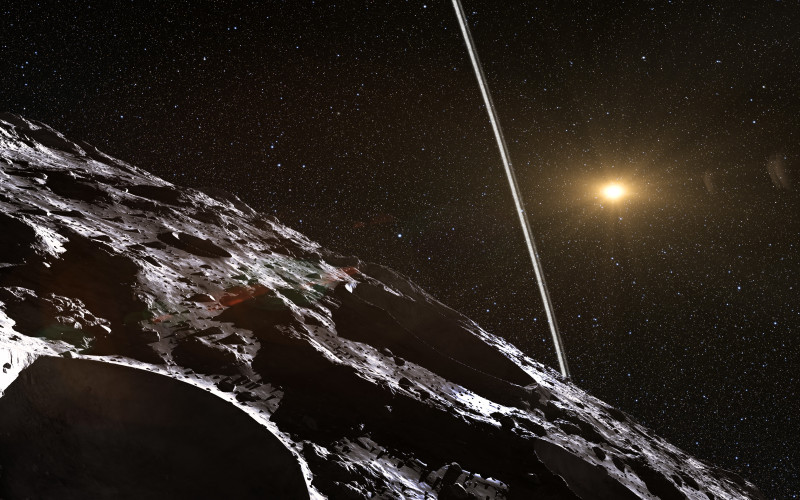 Artist’s impression of the remote asteroid Chariklo, which was discovered a year ago to have two dense and narrow rings. Now another minor planet, Chiron, might have rings, too. If so, it’ll be the 6th body in our solar system known to have a ring system. Image via ESO
Click to zoom

In order to confirm the presence of the rings around Chiron, a unique technique was used named, transit photometry. For this to be possible, it is required that an object pass in front of a bright planet or a star and the shadow that is formed is analyzed. This is precisely the manner in which they detected the rings around Chiron.

The rings comprise of mostly debris or other much smaller objects that revolve around Chiron on account of its own gravitational pull. At first it was concluded that Chiron was a dormant object, but, future studies have revealed that it is in fact quite active in nature.

Studies on Chiron are only possible when it passes over a bright spot, which is usually about once a year. Unfortunately, this phenomenon lasts for only a few minutes, restricting further studies. This is the reason why there are differences in opinion on its exact nature.

“Another possibility involves the history of Chiron’s distance from the sun. Centaurs may have started further out in the solar system and, through gravitational interactions with giant planets, have had their orbits perturbed closer in to the sun. The frozen material that would have been stable out past Pluto is becoming less stable closer in, and can turn into gases that spray dust and material off the surface of a body,” said Jessica Ruprecht, of MIT’s Lincoln Laboratory, .

An independent group has combined the researchers data with other observations and concluded that Chiron probably has a ring system however Rupreccht believes that further observations are necessary before the idea can be confirmed.

“If we want to make a strong case for rings around Chiron, we’ll need observations by multiple observers, distributed over a few hundred kilometers, so that we can map the ring geometry,” Ruprecht says. “But that alone doesn’t tell us if the rings are a temporary feature of Chiron, or a more permanent one. There’s a lot of work that needs to be done.”

If detection of a network of rings around Chiron is confirmed, the finding could suggest these features are more common around Centaur objects than previously believed.