if you’re anything like us you’re probably a fan of Saturn with its seven groups of gorgeous ring, 62 main moon and hundreds of smaller moonlets and also has one tiny artificial satellite, Cassini, which just finished its last close flyby of one of Saturn’s moons, Dione, on August 17.

NASA’s Cassini spacecraft has been exploring the Saturn system since 2004 and its made a lot of flybys of moons since then, but, there are still unanswered questions, especially about Dione.

On first glance, Dione only might look like your typical moon, pockmarked with craters, but it turns out that those craters are actually on the trailing side of the moon, not the one that would have collided with other bodies. So, it must have spun around at some point, probably because of some of these crater forming impacts, but scientists still aren’t sure how it could have rotated exactly a 180° and the wispy white lines on its surface, were originally thought to be frost deposits, but they’re actually giant ice canyon, walls up to hundreds of kilometers long. They must have been formed by some kind of geologic activity that shifted Dione’s crust around, but no one knows exactly what.

There’s been speculation that Dione could have a subsurface ocean and maybe some geysers, but so far, we haven’t found strong direct evidence for them.

With this last flybye, Cassini was looking for signs of that geologic activity by sniffing for dust particles and mapping the warmer heat trapping areas of the moon in the infrared among other things. So, we’re going to have to say goodbye to Dione now for a good long while. This was our last close look at the moon until we send some other high-powered probe to Saturn.

This year is going to be full of final moons flybys for Cassini. After 11 years of impeccable service, the probe is leaving Saturn equatorial plane near the orbit of many moons and shifting to a path that will take it just outside Saturn’s outer most group of rings, the F ring.

There, it will start a series of measurements that will finally give us a better estimate of the masses of Saturn’s rings before what mission scientists are calling the grand finale, as we’ve just four thousand kilometers from the planet and a final dive into the atmosphere.

But that’s not the only reason the F ring has been in the news lately. It’s a mysterious little band at a 140.000 kilometers from Saturn, a little more than half the distance from Earth to our moon, and only a hundred kilometers wide. It’s so hard to spot that we didn’t even know about it until the Pioneer eleven probe flew past Saturn in 1979.

Scientist have never quite been sure how the F ring form, but according to a study published in Nature this week, it might have had to due two tiny moonlets crashing together in a very specific way. 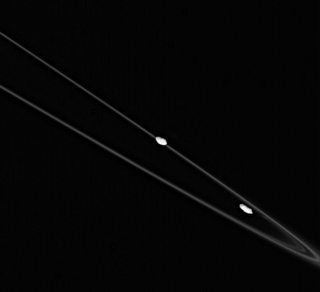 Those moons, called Prometheus and Pandora, are known as the shepherd moons, because their gravitational forces keep the particles in the F ring bound to a ring that span the distance between them. But how these particles got stuck between them in the first place has been an open question for a long time.

At first, astronomers thought that they might have come from a collision between the two moonlet, but when they simulated the impact, they found that both of the satellites would have been completely destroyed. In the new study, a team of Japanese researchers decided to simulate the collision in a different way.

In previous simulations, astronomers had assumed the movement for so-called rubble piles, a numerous pieces of icy particles bound together in a loose ball and that the collision would have been head-on, but there’s evidence that these moons may actually have a solid denser core and instead of plowing straight into each other, they could have sort of grazed past.

In that case, the researchers found that Prometheus and Pandora would have only partially disintegrated, with some of the particles knock off the crash forming a narrow band between them exactly what we’re seeing in the real life F ring.

Also, the team points out that something similar might have happened around Uranus, which has its own ring system, with similar shepherd moons. This may also help us understand the formation of giant planets outside our solar system, which we found alots of.

It will be a long time before recent probes to get a better look at those planet, but in the meantime, we have data much closer to home, like from Cassini, to help us learn what those far systems might look like.