Red Dwarf Star Passes Through Our Solar System 70000 Years Ago

Astronomers say a red dwarf star and its brown dwarf companion passed within 0.8 light-year of our own sun 70,000 years ago, moving through the comets in the outer reaches of the Oort Cloud that surrounds our solar system. In cosmic terms, that’s almost a close shave, astronomers say; our nearest neighbor star, Proxima Centauri, is a comfortable 4.2 light years away from us.

The low-mass star, dubbed “Scholz’s star,” (a binary system comprising a red dwarf and brown dwarf companion first observed in 2013) caught astronomers’ attention because despite being fairly close in astronomical terms, just 20 light years away, it displayed very slow motion across the sky, known as tangential motion, the scientists report in the Astrophysical Journal Letters. 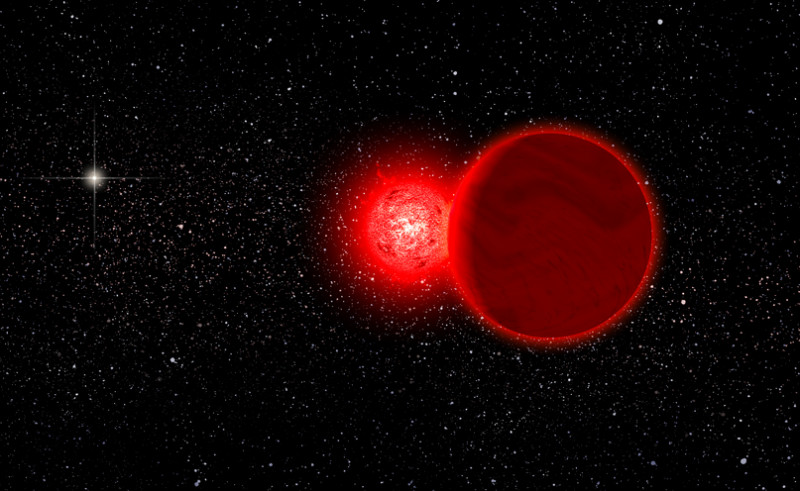 A star now speeding away from us once came within less than a light year of our solar system, a cosmic “close shave,” astronomer say. Near fly-by took place 70,000 years ago.
(Photo : Michael Osadciw/University of Rochester)

Until now, the top candidate for the closest known flyby of a star to the solar system was the so-called “rogue star” HIP 85605, which was predicted to come close to our solar system in 240,000 to 470,000 years from now. However, Eric Mamajek (from the University of Rochester & lead study author) and his collaborators have also demonstrated that the original distance to HIP 85605 was likely underestimated by a factor of ten. At its more likely distance – about 200 light years – HIP 85605’s newly calculated trajectory would not bring it within the Oort Cloud.

Mamajek and Scott Barenfeld, now a graduate student at Caltech, simulated 10,000 orbits for the star taking position, distance and velocity into account as well as the Milky Way’s gravitational field and statistical uncertainties for all of these measurements. 98% of the simulations showed Scholz’s star passing through the Oort cloud, only one brought the star within the inner Oort cloud which would have triggered “comet showers”.

While the close flyby of Scholz’s star likely had little impact on the Oort Cloud, Mamajek points out that “other dynamically important Oort Cloud perturbers may be lurking among nearby stars.” The recently launched European Space Agency Gaia satellite is expected to map out the distances and measure the velocities of a billion stars. With the Gaia data, astronomers will be able to tell which other stars may have had a close encounter with us in the past or will in the distant future.