For example, Kepler saw four daily dips in the light curve as the binary dwarfs crossed each other every six hours. It also saw another slight decline in the observed light every 204 days caused by the eclipsing third star.

You’d think four years’ worth of observation would be enough to get well acquainted with KIC. And so did astronomers. 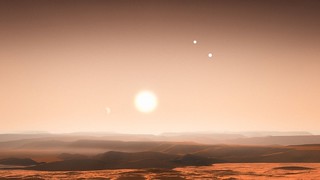 Astronomers first thought that KIC 2856960 would be a triple star system like Gliese 667C, imagined here in an illustration. (click to zoom)

But after fiddling with the numbers, the data didn’t make sense in the context of the observed behaviors of the stars. Their first job was to pin down the stellar masses. But no matter how they crunched the numbers, they failed to produce any sensible answers, even though ascertaining the mass of the stars should have been relatively straightforward.