HD’s distance from its parent star is an absolutely mind-boggling 650 astronomical units (AU). The incredibly lonely Neptune, our most distant planet, lumbers around the Sun at a distance of 30 AU. This is already an amazing range, but HD is so far separated from its parent that Neptune and the Sun are comparatively within hugging distance.

This huge discrepancy is responsible for the addition of many asterisks above our planetary formation theories, as astronomers scramble to explain HD’s existence in spite of its vast orbit and heft. 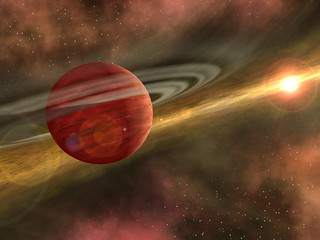 This is an artist’s impression of the exoplanet HD 106906 b in a distant orbit around its host star. Image credit: NASA / JPL-Caltech. (click to zoom)

For example, the forces responsible for making planets are usually undone by such great distances, raising the possibility that HD was created via the collapse of a debris ring. Yet HD is too massive for that to happen. And the primordial disks of raw matter that can birth planets simply do not contain enough stuff to produce giants like HD. Another possibility is that we’ve discovered a failed binary star system, wherein HD failed to attract enough material to ignite fusion within its gassy bosom. However, the mass ratio between potential binaries is usually no more than 10:1. In HD’s case, however, we’re looking at a 100:1 disparity.