By Editors | On 08, Jan 2015 | 12 mins: 15 secs + -
3
The Asteroid With Rings
All our gas giants are encircled by rings, though most of these are tenuous wisps of debris quite unlike Saturn’s massive sets of bling. And now, for the first time and quite unexpectedly, astronomers have found rings around a much smaller body.

Meet Chariklo, an asteroid measuring only 250 kilometers (155 mi) across yet boasting its own ring system.Chariklo, though the largest object in its cosmic vicinity, looked like an unremarkable chunk of space rock. Then astronomers noticed its anomalous light signature.

As it eclipsed a faraway star, it caused an unanticipated dip in the amount of light reaching our telescopes. The dimming action occurred immediately before and after it crossed the star’s path, causing momentary confusion. It turns out that Chariklo sports not one but two cosmic necklaces. 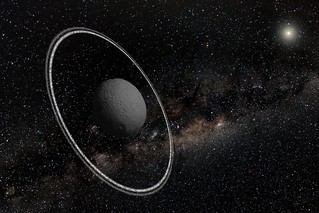 An artist’s conception shows the icy asteroid Chariklo and its rings, which are 4 miles and 2 miles (7 kilometers and 3 kilometers) wide and separated by a 6-mile-wide (9-kilometer-wide) gap. The ring system extends about 500 miles (810 kilometers) in diameter. (click to zoom)

Containing a good amount of frozen water, the larger of the rings hugging the planet is 7 kilometers (4 mi) wide, while the smaller is about half that size. And while some asteroids do have “moons”—tiny satellites dancing around them—Chariklo is unique because a ring around an asteroid had never been observed. The rings’ origin is unclear, though it appears they were formed by an impact. They are either the remnants of a foreign body that shattered itself against Chariklo or pieces of Chariklo itself that blew off during the crash.