By Editors | On 08, Jan 2015 | 12 mins: 15 secs + -
4
Galaxies 13 Billion Years Old
The early universe was an approximation of hell—a roiling, opaquely dense stew of electrons and protons. Almost half a billion years passed before the baby universe cooled down enough to allow the formation of neutrons. Shortly thereafter, the universal landscape settled further so that stars and galaxies could come into being.

A recent ultra-deep survey by the Subaru telescope—located in Hawaii and run by the National Astronomical Observatory of Japan—revealed seven of the earliest galaxies ever. Over 13 billion light-years distant, they appeared as unimaginably faint pinpricks of light.

In fact, they were visible only after Subaru focused on a tiny patch of sky for over 100 hours of exposure.Born only 700 million years after the big bang exploded everything into existence, these galaxies are among the earliest things ever observed and are among the first evidence of organization within the universe. 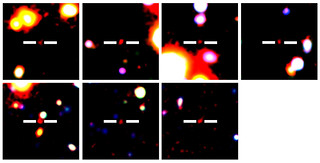 Color composite images of seven LAEs found in this study as they appeared 13.1 billion years ago. This represents the combination of three filter images from Subaru Telescope. Red objects between two white lines are the LAEs. The LAEs of 13.1 billion years ago have a quite red color due to the effects of cosmic expansion on their component wavelengths of light. Credit: ICRR, University of Tokyo (click to zoom)

These types of galaxies are characterized by intense hydrogen excitation and an absence of heavier elements since metals (other than minute amounts of lithium) hadn’t been blasted into existence yet by supernovae. Termed Lyman-alpha emitters (LAE), these galaxies appeared suddenly and for (more or less) unknown reasons.

LAE galaxies are prolific star-producers, and their extreme age offers insight into the evolution of the universe. However, astronomers aren’t sure if the ones captured by Subaru were newly formed or if they’d been present and were only made visible by a thinning of the cosmic gas that initially obscured them.