The universe loves to confuse us. And sometimes, the discoveries that benefit science the most are those that leave us severely confused and scrambling for crazy explanations.

5
The Six-Tailed Asteroid
Hubble has revealed yet another incredible curiosity—an asteroid that thinks it’s a comet. While the latter bodies are easily recognized by their bright, streaming tails, asteroids do not usually have such features since they possess little ice and are made mostly of heavier elements and rock.

So spotting an asteroid with not one but six tails was an incredible surprise. Asteroid P/2013 P5 is a unique find with its six spouting jets, as all other pieces of cosmic debris are quite content with considerably fewer. 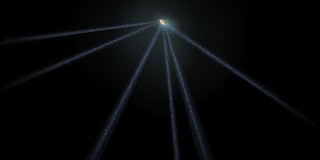 It blasts material indiscriminately into space like a cosmic lawn sprinkler It’s unclear why the object behaves and looks the way it does. One awesomely destructive possibility is that P5 is rotating so quickly that it’s inadvertently killing itself.

Its tiny gravity is no match for the greater rotational forces ripping it apart. And radiation pressure from solar emissions stretches the scattering debris into dazzling, comet-like appendages. However, astronomers do know that P5 is a leftover chunk from a previous impact. The tails most likely contain zero ice content, since frozen water is unlikely to be found in an object that’s been previously exploded to 800 degrees Celsius (1,500 °F).