Simulations show that nitrogen from Pluto’s atmosphere could be flowing over to its moon Charon. If this is confirmed, Pluto and Charon would be the first known example of a planet and its moon sharing an atmosphere.

Charon is almost half the size of Pluto and orbits much closer to the dwarf planet than our moon does to Earth. Studies in the 1980s suggested the two bodies might be able to exchange gases, but that work assumed Pluto’s atmosphere is made up primarily of methane, and that the gas was escaping at relatively high speeds.

Using telescopes on Earth, astronomers took a closer look at the light coming from Pluto and scanned it for clues about the planet’s composition. It turns out that Pluto’s atmosphere consists mainly of nitrogen, a heavier gas than methane, and that the escape rate is lower.

“People thought that even if Charon did gain an atmosphere through this process, it was too thin to ever detect,” says Robert Johnson at the University of Virginia in Charlottesville. 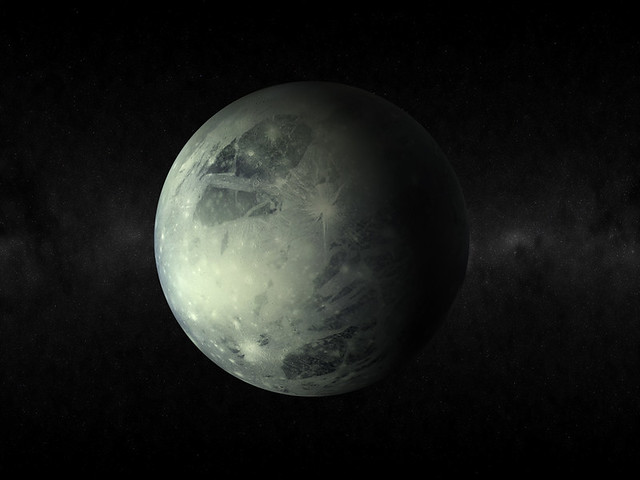 Now Johnson and his team have updated models of Pluto’s upper atmosphere, taking into account the way the nitrogen molecules would move and collide with each other. Their simulations show that the dwarf planet’s atmosphere could be warmer than thought, and so may be up to three times as thick as previously predicted.

That means it may extend far enough into space for some gas to be pulled across by Charon’s gravity, giving it a tenuous covering. NASA’s New Horizons spacecraft is set to fly through the Pluto system in July 2015. It is carrying instruments that could detect any atmosphere that exists around Charon and figure out what it is made of, says mission leader Alan Stern at the Southwest Research Institute in Boulder, Colorado.

Knowing the identities and concentrations of any gases around Charon will be essential for determining whether the moon’s atmosphere is borrowed from Pluto or created by some other means. It is also possible that gas from Charon’s interior is escaping through geysers or vents to create a thin atmosphere. And Stern’s latest study suggests that comet impacts on the moon’s surface could release clouds of gas to create a transient atmosphere.

But if Pluto and Charon do share a shroud, the system could provide a real example of gas transfer between two bodies, helping us refine models of the phenomenon elsewhere in the galaxy