Our Universe was Born During a Collision with Another Universe?

Though many physicists believe it’s possible that our universe is one of many in a multiverse, they struggle to find concrete evidence to back up that hypothesis.

But now, we may find that evidence — if we look for the wreckage left behind by a collision of cosmic proportions. Over at Quanta, Jennifer Oullette explores one experiment that could provide evidence for the multiverse. It assumes that our universe was born during a collision with another universe — and that this dramatic event may have left a cosmic imprint behind that we can measure.

Like many of her colleagues, Hiranya Peiris, a cosmologist at University College London, once largely dismissed the notion that our universe might be only one of many in a vast multiverse.

It was scientifically intriguing, she thought, but also fundamentally untestable. She preferred to focus her research on more concrete questions, like how galaxies evolve.

Then one summer at the Aspen Center for Physics, Peiris found herself chatting with the Perimeter Institute’s Matt Johnson, who mentioned his interest in developing tools to study the idea. He suggested that they collaborate. 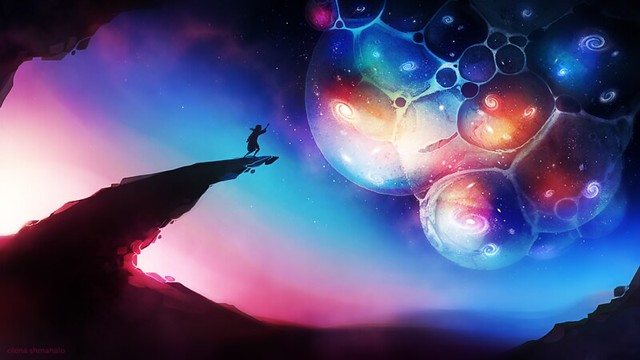 At first, Peiris was skeptical. “I think as an observer that any theory, however interesting and elegant, is seriously lacking if it doesn’t have testable consequences,” she said. But Johnson convinced her that there might be a way to test the concept. If the universe that we inhabit had long ago collided with another universe, the crash would have left an imprint on the cosmic microwave background (CMB), the faint afterglow from the Big Bang. And if physicists could detect such a signature, it would provide a window into the multiverse.

Erick Weinberg, a physicist at Columbia University, explains this multiverse by comparing it to a boiling cauldron, with the bubbles representing individual universes — isolated pockets of space-time. As the pot boils, the bubbles expand and sometimes collide. A similar process may have occurred in the first moments of the cosmos.

In the years since their initial meeting, Peiris and Johnson have studied how a collision with another universe in the earliest moments of time would have sent something similar to a shock wave across our universe. They think they may be able to find evidence of such a collision in data from the Planck space telescope, which maps the CMB.

The project might not work, Peiris concedes. It requires not only that we live in a multiverse but also that our universe collided with another in our primal cosmic history. But if physicists succeed, they will have the first improbable evidence of a cosmos beyond our own.