As astronomers have gained the ability gaze at far-off exoplanets, they have started to realize our solar system is more unique than they could have imagined. Many other alien’ systems have ‘super-Earths’ and other planets in tight orbits close to their star, but ours does not. And now we might know why.

According to a team of scientists at UC Santa Cruz, Jupiter either destroyed other planets during early formation period or chase them out of our solar system in order to allow Earth take root and support life. This is based on research conducted as well as reference to other supporting studies.

The results of the study published in the Proceedings of the National Academy of Sciences could explain why our solar system is so differently constituted compared with the hundreds of other planetary systems astronomers have been discovering orbiting distant stars.

“Indeed, it appears that the solar system today is not the common representative of the galactic planetary census,” says planetary scientist Konstantin Batygin at the California Institute of Technology. “Instead we are something of an outlier.”

In Solar System 1.0, the region closest to the sun was occupied by numerous planets with masses several times bigger than that of Earth. There were also planetesimals, “planetary building blocks” that formed within the first million years after the birth of the sun.

This is how things might have stayed if the young Jupiter had stayed put at its initial orbit, between 3 and 10 astronomical units away from the sun (An astronomical unit, or AU, is the distance between the Earth and the sun. Today, Jupiter’s orbit ranges between 5 and 5.5 AUs from the sun.) 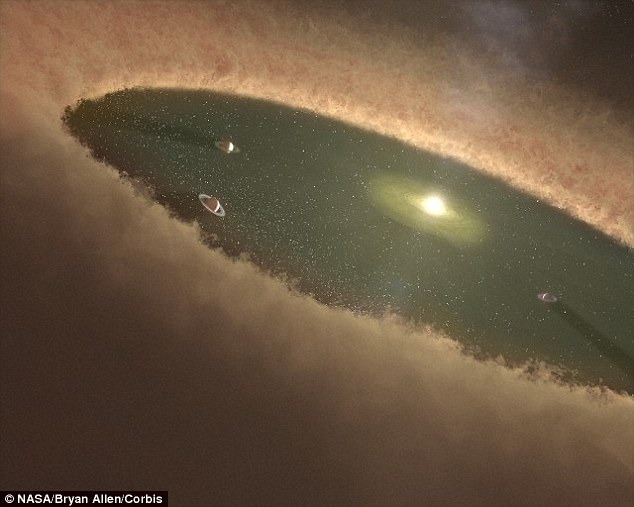 Scientists have presented a new theory for the solar system. They say early in its life, Jupiter swung through the inner planets.
Click to zoom

But Jupiter was restless, according to a scenario known as the “Grand Tack.” In this version of events, Jupiter was swept up by the currents of gas that surrounded the young sun and drifted toward the center of the solar system.

Jupiter, however, was too big to travel solo. All manner of smaller objects would have been dragged along too. With so many bodies in motion, there would have been a lot of crashes.

“It’s the same thing we worry about if satellites were to be destroyed in low-Earth orbit. Their fragments would start smashing into other satellites and you’d risk a chain reaction of collisions,” said Gregory Laughlin, professor and chair of astronomy and astrophysics at University of California, Santa Cruz, and co-author of a new paper. “Our work indicates that Jupiter would have created just such a collisional cascade in the inner solar system.”

“This kind of theory, where first this happened and then that happened, is almost always wrong, so I was initially skeptical,” Laughlin said in a statement. However, “there is a lot of evidence that supports the idea of Jupiter’s inward and then outward migration. Our work looks at the consequences of that. Jupiter’s ‘Grand Tack’ may well have been a ‘Grand Attack’ on the original inner solar system.”

One implication of these new findings is that life as it is known on Earth might be rarer in the universe than previously thought.

“While Earth-mass planets may indeed be plentiful in the galaxy, truly Earth-like planets, with low atmospheric pressures and temperatures on the surfaces, are likely an exception to the rule,” Batygin said. “A distant analog that comes to mind is Venus — Venusian atmospheric pressure is 90 times greater than that of the Earth and the surface temperature is about 450 degrees Celsius (842 degrees Fahrenheit).”

“Even with a relatively low-mass atmosphere, Venus is not hospitable to life as we know it. One can only imagine the kinds of extreme environments that are typical of extrasolar planets,” Batygin said.

“This is all to say that life that has evolved on Earth is not well suited to other planets. If solar system exploration and the search for exoplanets have taught us one thing, however, it is to never underestimate the physical diversity of planetary systems. Therefore, extrasolar life, where it exists, will differ substantially from our common definition and thrive in its own unique environment that is unlike anything we are used to.”

Another potential consequence of these findings is that “Jupiter-like planets and populations of super-Earths should be mutually exclusive, and as a rule will not be hosted by the same stars,” Batygin said.

As planet hunters identify additional systems that harbor gas giants, Batygin and Laughlin will have more data against which they can check their hypothesis – to see just how often other migrating giant planets set off collisional cascades in their planetary systems, sending primordial super-Earths into their host stars.