With the help of the Dark Energy Survey, which includes mapping the southern sky, the astronomers from the University of Cambridge have identified nine dwarf galaxies orbiting the Milky Way making it the largest number ever discovered at once. The latest finding is the first discovery of dwarf galaxies in the last ten years, after dozens of them were found in 2005 and 2006 in the skies above the northern hemisphere.

“The discovery of so many satellites in such a small area of the sky was completely unexpected,” said Dr Sergey Koposov. “I could not believe my eyes.”

These Dwarf galaxies are the smallest of all the observed galactic structures, sometimes as small as just 5,000 stars compared to the Milky Way’s estimated 200 to 400 billion stars. It is also estimated that they contain up to 99 percent dark matter, and just one percent observable matter which makes them perfect for testing dark matter models.

Belokurov said: “Dwarf satellites are the final frontier for testing our theories of dark matter.” “We need to find them to determine whether our cosmological picture makes sense. Finding such a large group of satellites near the Magellanic Clouds was surprising, though, as earlier surveys of the southern sky found very little, so we were not expecting to stumble on such treasure.” 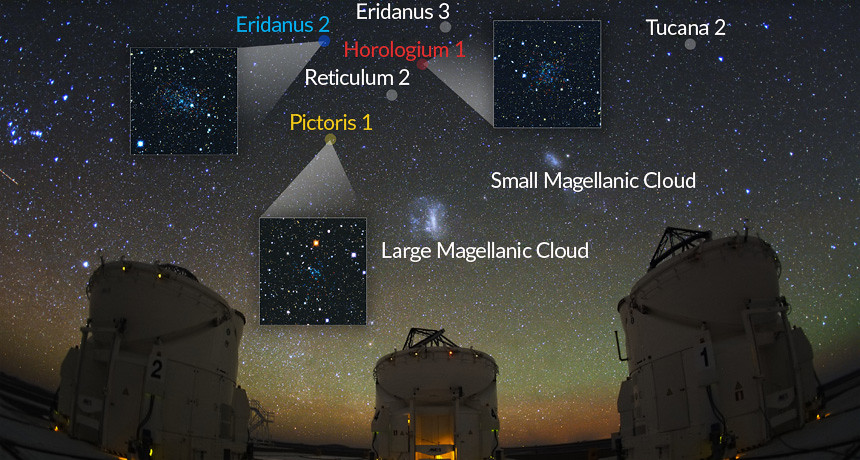 SKY SURPRISE Several newly discovered satellite galaxies of the Milky Way huddle near the Magellanic Clouds in this picture of the sky above the Paranal Observatory in Chile.
Click to zoom

While more analysis is required to confirm any of the observed celestial objects as satellite galaxies, researchers note their size, low surface brightness and significant distance from the center of the Milky Way as evidence that they are excellent candidates.

More Info: The closest dwarf galaxy among these is 97,000 light-years away and sits in the Reticulum constellation. The Milky Way is currently ripping apart that galaxy.

The farthest is about 1.2 million light-years away in the Eridanus constellation, and it is right at the end of the Milky Way on the verge of being pulled into its gravity field, according to the report.

Scientists are excited but puzzled by the galaxies. Co-author Wyn Evans of the Institute of Astronomy suggesting that they may have once been satellites that orbited the Magellanic Clouds that is only know falling into the Milky Way.

Bottom line: The Dark Energy survey, which provided the data for the new discoveries, is a five-year project to photograph a large portion of the southern sky in unprecedented detail, using the 570 megapixel Dark Energy Camera, the most powerful digital camera in the world, able to see galaxies up to 8 billion light-years from Earth.