Newfound Gas Giant Planet Is The Most Distant Exoplanet Ever Detected

Scientists using Spitzer Space Telescope have discovered a gas giant planet that’s roughly 13,000 light-years away from Earth, OGLE-2014-BLG-0124Lb is one of the furthest planets ever discovered.

The new discovery may help scientists to solve the mysteries behind how planets are distributed throughout the Milky Way.

We don’t know if planets are more common in our galaxy’s central bulge or the disk of the galaxy, which is why these observations are so important.

said Jennifer Yee, from the Harvard-Smithsonian Center for Astrophysics and one of the authors of the study published in the Astrophysical Journal.

This new exoplanet was detected using a technique called microlensing: when one star travels in front of another stars, the gravity of the star serves as a lens that magnifies and brightens the light from the background star. Should the star in front have a planet, it could cause a blip in magnification. Using these blips, scientists see and document exoplanets as far as 27,000 light years from the Earth. So far, this tehnique has led to the discovery of nearly 30 new exoplanets including OGLE-2014-BLG-0124Lb.

Microlensing experiments are already detecting planets from the solar neighborhood to almost the center of the Milky Way.

And so they can, in principle, tell us the relative efficiency of planet formation across this huge expanse of our galaxy. 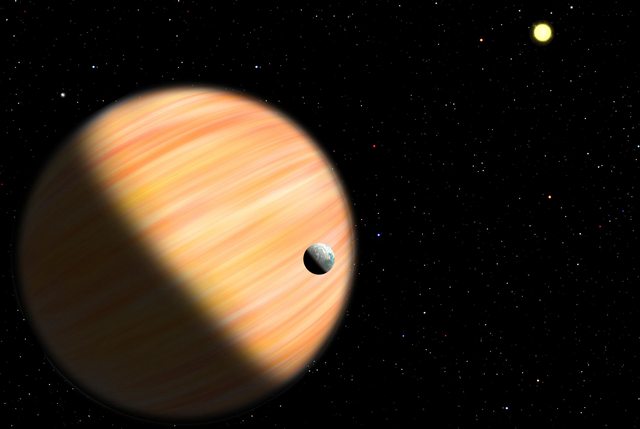 Since the technique can only detect the presence of planets and cannot determin how far away those exoplanets are, astronomers use the Spitzer telescope to overcome the distance problem. Spitzer telescope, which currently circles our Sun and is located about 128 million miles away from Earth, is the first telescope capable to found a planet using microlensing.

Spitzer is the first space telescope to make a microlens parallax measurement for a planet. Traditional parallax techniques that employ ground-based telescopes are not as effective at such great distances.

In the case of the newfound planet the duration of the microlensing event occurred about 150 days. Both the space and the ground telescopes detected the telltale planetary blip in the magnification, albeit Spitzer saw it occur 20 days earlier.

Thanks to these two telescopes, we are continuing the adventure of finding other worlds besides our own such as this new exoplanet in our Milky Way.