Water was crucial to the rise of life on Earth and is also important to evaluating the possibility of life on other planets. Identifying the original source of Earth’s water is key to understanding how life-fostering environments come into being and how likely they are to be found elsewhere.

The sun is thought to be 4.5 billion years old, but water on Earth may have formed before then as tiny crystals of ice floating around deep space.

New work from a team, including Carnegie’s Conel Alexander, found that much of our solar system’s water likely originated as ices that formed in interstellar space.

Water is found throughout our solar system, not just on Earth, but on icy comets and moons and in the shadowed basins of Mercury. Water has been found included in mineral samples from meteorites, the Moon, and Mars.

Comets and asteroids in particular, being primitive objects, provide a natural “time capsule” of the conditions during the early days of our solar system. Their ices can tell scientists about the ice that encircled the Sun after its birth, the origin of which was an unanswered question until now. 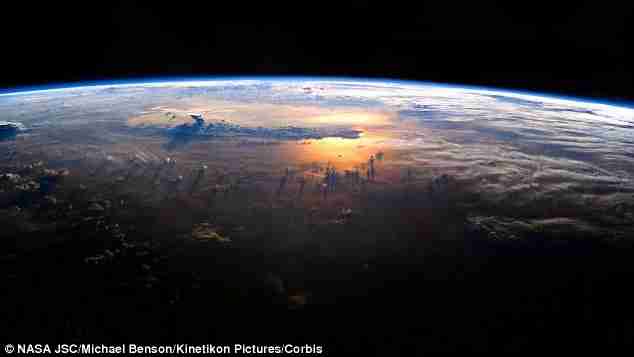 ‘By identifying the ancient heritage of Earth’s water, we can see that the way in which our solar system was formed will not be unique, and that exoplanets will form in environments with abundant water.

‘It raises the possibility that some exoplanets could house the right conditions, and water resources, for life to evolve.’

The international team of scientists studied ancient ices preserved in comets and asteroids since the early days of the solar system.

Researchers ran computer models comparing ratios of hydrogen with its heavier isotope, deuterium, which has been enriching the solar system’s water over time.

In order to reach the ratios found in meteorite samples, as well as in Earth’s ocean water and comets, at least some of the water would have to have been formed before the sun’s birth, the scientists concluded. The process would probably be the same for other planetary systems as well, suggesting that conditions hospitable for life could exist beyond Earth.

“Our findings show that a significant fraction of our Solar System’s water, the most-fundamental ingredient to fostering life, is older than the Sun, which indicates that abundant, organic-rich interstellar ices should probably be found in all young planetary systems,” Alexander said.

‘The widespread availability of water during the planet-formation process puts a promising outlook on the prevalence of life throughout the galaxy.