Astronomers surprised to see a huge leap in fresh sand in the region of the star NGC 2547-ID8. The star was frequently tracked between August 2012 to January 2013, NASA’s Spitzer Space Telescope, which saw a huge flood of fresh dust.

The scientists feel that this dust surge could be possible only after a collision between two asteroids. The collision of the two clouds created a massive cloud which has been made up of grains if very fine sand.

The fine grains are now smashing against one another and getting pulverized before slowly leaking away from the star. NASA’s Spitzer Space Telescope which captured the rare occurrence, the outcome of suspected collisions. This is for the first time that scientists have data on the event, both before and after it happened.

“We think two big asteroids crashed into each other, creating a huge cloud of grains the size of very fine sand, which are now smashing themselves into smithereens and slowly leaking away from the star,” said lead author Huan Meng of the University of Arizona, Tucson, in an article published Friday online in the journal Science. 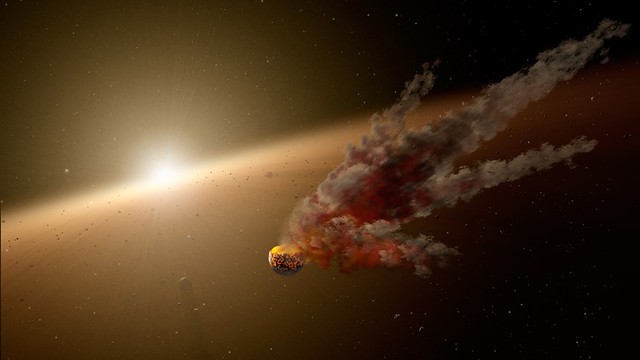 This artist’s concept shows the immediate aftermath of a large asteroid impact around NGC 2547-ID8, a 35-million-year-old Sun-like star. NASA’s Spitzer Space Telescope witnessed a giant surge in dust around the star, likely the result of two asteroids colliding (click to zoom)

The viewing of this collision offers a glimpse into the violent process of making rocky planets like ours.

Rocky planets begin life as dusty material circling around young stars. The material clumps together to form asteroids that ram into each other.

Although the asteroids often are destroyed, some grow over time and transform into protoplanets. After about 100 million years, the objects mature into full-grown terrestrial planets.

A thick cloud of dust now orbits the star in the zone where rocky planets typically form. Spitzer uses infrared eyes to see far into space and observe NGC 2547-ID8, which is about 1,200 light-years away. Scientists use the infrared signals from the dust cloud, but what the signal varies depending what is visible from Earth.

When the elongated dust cloud faces the Earth, the telescope captures more of the infrared signals, but when the head or tail of the cloud is in line with Earth less is observed. By studying this scientists can learn more about how planets similar to Earth form.

“We are watching rocky planet formation happen right in front of us,” said George Rieke, a University of Arizona co-author of the new study. “This is a unique chance to study this process in near real-time.”

“The team is continuing to keep an eye on the star with Spitzer,” the US space agency added. “They will see how long the elevated dust levels persist, which will help them calculate how often such events happen around this and other stars. And they might see another smashup while Spitzer looks on.”