Using NASA’ Chandra X-ray Observatory, an international team of researchers has discovered the smallest supermassive black hole yet resides at the center of a distant galaxy, 340 million light-years away from us.

What we found was the smallest supermassive black hole,

So it sits at the center of a very small galaxy and it weighs about 50,000 times the mass of our sun…and so it sort of bridges this gap between these two categories of black hole.

Small it may be, but it could help astronomers to better understand how supermassive black holes form and develop over time.

It might sound contradictory, but finding such a small, large black hole is very important. We can use observations of the lightest supermassive black holes to better understand how black holes of different sizes grow,

added Dr. Baldassare ~ lead author of the study accepted for publication in the Astrophysical Journal Letters.

Black holes are some of the strangest and most mysterious objects found in space. They are such dense and massive with such strong gravitational attraction that even light cannot escape. They are come in two main types:

The stellar mass variety when large stars die and collapse — that were several times the mass of the sun — or the supermassive kind, which are thought to sit at the center of every large galaxy — between a few million and a few billion solar masses.

Researchers explained that all large galaxies, including our galaxy the Milky Way, has a supermassive black hole at its core. The newly discovered object is one of the first to be identified in a dwarf galaxy. Astronomers don’t yet understand how these objects form. 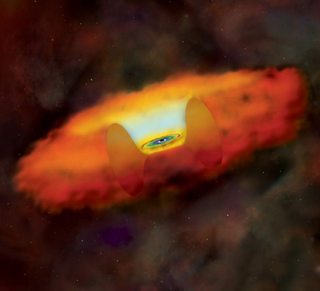 Most galaxies are fairly small – and whereas we are fairly convinced that there is a black hole sitting at the center of every big galaxy, we’re not sure whether that’s the case in the small ones,

It’s just harder to find them, so that’s why we don’t really know.

And if there are black holes there, we don’t know whether they behave, with respect to their host galaxy, the same way as the big ones do.

This discovery could help scientist to better understand the relationship between dwarf galaxies and their black holes.

These little galaxies can serve as analogs to galaxies in the earlier universe,

By studying how galaxies like this one are growing and feeding their black holes and how the two are influencing each other, we could gain a better understanding of how galaxies were forming in the early universe.

Preprint paper: arXiv.org.
Featured image: ©TheLizardLover.
© Content from this site must be hyperlinked when used.