NASA’s focus for human spaceflight seems to change every few years as we learn something new about what it will take to keep human beings alive out there. However, NASA usually picks one of a few targets. Will we go to Mars next, maybe back to the Moon, or perhaps an asteroid is a better option? NASA’s Langley Research Center has put forward an interesting proposal — instead of the traditional choices, why not make the trip to Venus?

Nasa plans to send solar-powered airships to explore Venus’ atmosphere and to eventually establish a permanent human colony in a floating cloud city above the Earth’s nearest planetary neighbour. Dale Arney and Chris Jones, from the Space Mission Analysis Branch of Nasa’s Systems Analysis and Concepts Directorate at Langley Research Center, in Virginia, have proposed that it may make sense to go to Venus before we ever send humans to Mars.

A furture in the clouds? A Venus exploration mission envisioned by NASA sees a future in which a permanent human habitat could float in the clouds above Earth’s fiery neighbor

The surface of Venus is a notorious hell-hole. If an atmospheric pressure roughly 90 times greater than Earth isn’t enough for you, try the surface temperature, which can grow to almost five times the boiling point of water.

Got a nice pressure suit to keep you cool? Make sure it’s resistant to the effects of corrosive substances dissolved into the “air,” which is itself up to 95% carbon dioxide, as it is packed with the remnants of concentrated acid rain that mostly evaporates several kilometers above the surface.

Venus has violent volcanism, earthquakes, and lightning of a sort we Earthlings can hardly comprehend — little wonder that our few Venus-bound probes and satellites have all died shortly after entering the atmosphere.

But what if we redefine the term “entering the atmosphere” to mean “just barely entering the atmosphere,” without descending to the hellish surface, itself? That’s the idea behind a new report from NASA’s Systems Analysis and Concepts Directorate, which argues that long-term crewed missions, even permanent installations, could float on the clouds above our sister planet.

NASA has proposed a High Altitude Venus Operational Concept (or HAVOC), the proposed space balloons would sit at roughly 50 kilometers above Venus, with astronauts living in a cloud city, subject to about 85% Earth gravity, and the temperature peaks below 80°C — still higher than you could find anywhere on Earth, but low enough that NASA scientists can deal with it via the super-materials of modern astrophysics.

On average, Venus is less than half Mars’ distance from Earth, while its thick atmosphere would both protect astronauts from intense radiation and allow enough solar radiation through to make solar power a real option. The Langeley team argues that we ought to focus on the upper atmosphere of Venus, and not the surface of Mars, for our first manned mission to an alien world.

The Venus mission would occur in five stages: robotic exploration, a 1-month orbiting mission, a 1-month atmospheric mission, a 1-year atmospheric mission, and finally a semi-permanent installation with rotating crew. This would be far easier to keep going than a Mars missions since, first of all, it’s so much closer, and since docking with a cloud facility wouldn’t require as much fuel/power as landing and taking off from the surface of Mars.

The robotic airship would be about half the size of the Goodyear blimp, solar-powered, and filled with helium. The crewed version, which would be about 426 feet (130 meters) long, would be covered with solar panels and have a gondola slung underneath.

Needless to say, getting the airships to Venus won’t be easy. Evan Ackerman explains:

The crewed mission would involve a Venus orbit rendezvous, where the airship itself (folded up inside a spacecraft) would be sent to Venus ahead of time. Humans would follow in a transit vehicle (based on NASA’s Deep Space Habitat), linking up with the airship in Venus orbit.

Since there’s no surface to land on, the “landing” would be extreme, to say the least. “Traditionally, say if you’re going to Mars, you talk about ‘entry, descent, and landing,’ or EDL,” explains Arney. “Obviously, in our case, ‘landing’ would represent a significant failure of the mission, so instead we have ‘entry, descent, and inflation,’ or EDI.” The airship would enter the Venusian atmosphere inside an aeroshell at 7,200 meters per second. Over the next seven minutes, the aeroshell would decelerate to 450 m/s, and it would deploy a parachute to slow itself down further. At this point, things get crazy. The aeroshell would drop away, and the airship would begin to unfurl and inflate itself, while still dropping through the atmosphere at 100 m/s. As the airship got larger, its lift and drag would both increase to the point where the parachute became redundant. The parachute would be jettisoned, the airship would fully inflate, and (if everything had gone as it’s supposed to), it would gently float to a stop at 50 km above Venus’s surface. 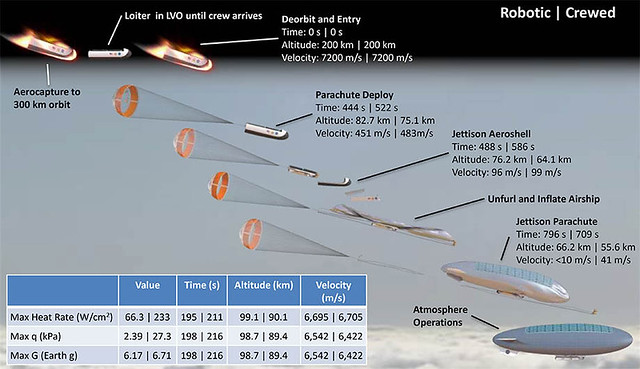 The airship will begin its plummet into the atmosphere at 7200 meters per second. Image: NASA Langley Research Center (click to zoom)

But once there, and situated near the equator, the astronauts could ride along the 100 m/s winds and circle the planet in just 110 hours (Venus itself barely rotates). Working in the airships, the astronauts could assess the environment for eventual human missions. They could also bring small robotic landers with them to scour the blazingly hot and heavy Venusian surface (its 500 degrees C with 92 atmospheres of pressure down there).

“It would take a substantial policy shift at NASA to put a crewed mission to Venus ahead of one to Mars, no matter how much sense it might make to take a serious look at HAVOC,” concludes Ackerman, “But that in no way invalidates the overall concept for the mission, the importance of a crewed mission to Venus, or the vision of an eventual long-term human presence there in cities in the clouds.”