Most planets have just one or two stars to contend with. Now, though, astronomers have discovered the second known case of a planet residing in a quadruple star system. The planet was known before, but was previously thought to have only three stars, not four.

The astronomers spotted the new exoplanets with the help of the Robo-AO adaptive optics system. Though, the recent discovery suggests that these planets may be less rare than previously thought.

The planet is at least 10 times as big as Jupiter and located 136 light-years away in the constellation Aries. Scientists say it probably has no actual surface to stand on. But, if you could fly a spacecraft into its atmosphere and look up, you would see one primary sun, a bright red dot, and another star shining more brightly than Venus does in our night sky. If you pulled out a telescope, the smallest white star would be revealed to be a binary system of two stars. 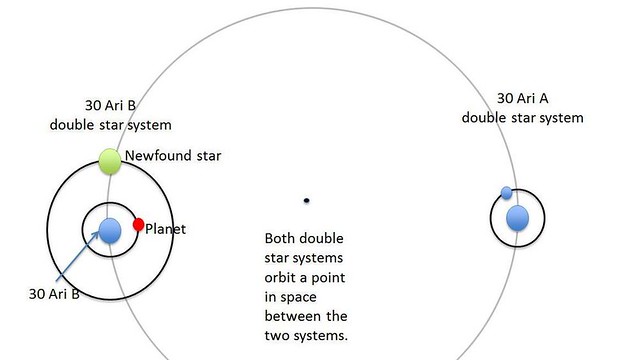 The four stars and one planet of the 30 Ari system are illustrated in this diagram. (NASA / JPL-Caltech)
Click to zoom

The star system itself is made up of two pairs of twin stars slowly circling each other at great distances. Called 30 Ari, the star system is located 136 light-years away from the constellation Aries.

“About four percent of solar-type stars are in quadruple systems, which is up from previous estimates because observational techniques are steadily improving,” said Andrei Tokovinin, co-author of the new study, in a news release.

According to astronomers, it’s highly unlikely the planet (or any moons it supports) are capable of supporting life.

Past evidence has suggested that stars can influence the orbit and even size of nearby planets, these findings could provide insight into how this phenomenon would differ in solar systems containing multiple stars. The researchers do not believe the newfound star in the 30 Ari system has had an influence on the orbit of the nearby hot Jupiter, and in the future they hope to determine why these changes did not occur.

No matter what information this discovery yields, it undoubtedly brings to mind an intriguing image of a star-speckled daytime sky and the confounding physics in space.