NASA Detects The Brighest Flare Ever From A Distant Galaxy

Astronomers have managed to analyse a spectacular flare from a supermassive black hole at the center of galaxy 3C 279, a record flare that happened five billion years ago.

One day 3C 279 was just one of the many active galaxies we see, and the next day it was the brightest thing in the gamma-ray sky,

3C 279 is a distinguished blazar (very compact quasar), a galaxy whose high-energy activity is produced by a monster black hole billion times more massive than the sun, compacted into our solar system. As matter are captured and spiral into this central black hole, its generates huge amounts of electromagnetic radiation and create high-energy pair of jets pointed in opposite directions, oriented straight at us.

This flare is the most dynamic outburst Fermi has seen in its seven years of operation, becoming 10 times brighter overnight,

Our priority is to make observations while the object is still bright,

Once it’s over, we can start trying to understand the mechanisms powering it. 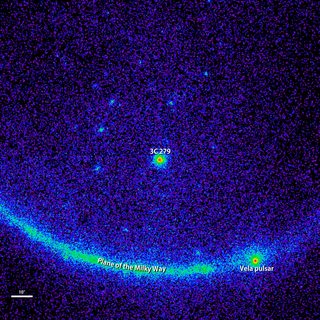 Although we didn’t expect to find the galaxy so bright, we soon had a much greater surprise,

This visualization shows gamma rays detected during 3C 279’s big flare by the LAT instrument on NASA’s Fermi satellite. Gamma rays are represented as expanding circles reminiscent of raindrops on water. The flare is an abrupt shower of “rain” that trails off toward the end of the movie. Both the maximum size of the circle and its color represent the energy of the gamma ray, with white lowest and magenta highest. In a second version of the visualization, a background map shows how the LAT detects 3C 279 and other sources by accumulating high-energy photons over time (brighter squares reflect higher numbers of gamma rays.