Astronomers, using the Hubble Space Telescope, have measured and characterized an enormous, galaxy-sized cloud of dust and gas, Known as The Smith Cloud, swirling around the Milky Way.

The monster gas cloud was named after the grad student who discovered it in the 1960’s, Gail Smith, has long been the subject of speculation and theory. It was initially found using radio telescopes receiving signals at the 21cm line of hydrogen but not a whole lot was known about it until recently.

However, new Hubble observations suggest it was launched from the outer regions of the galactic disk, around 70 million years ago. Now this gas cloud is huge and roughly the size of a small galaxy, it measures 11,000 light years long and 2,500 light years across and it is whizzing around our galaxy at about 1.1 million km/hr (700,000 miles per hour).

If you could look up and see this in the night sky, which you can’t because it’s way too dim in visible light, it would take up an area of the sky 30 times greater than the size of the full moon.

For years many astronomers thought that it was either a so-called ‘failed’ galaxy, which is a massive cloud where stars never formed, or maybe this was just a huge gas cloud coming at us from interstellar space. But if either of those explanations were true, then we’d expect to see mainly hydrogen and helium in the cloud and not the heavier elements made by stars.

However, if it came from within the galaxy, then it would contain more of the elements found within our sun. So to try and settle the matter, astronomers using the Cosmic Origins Spectrograph on Hubble took a look at what the cloud was made up of by measuring the light passing through the cloud from distant cores of three active galaxies billions of light years behind the cloud. 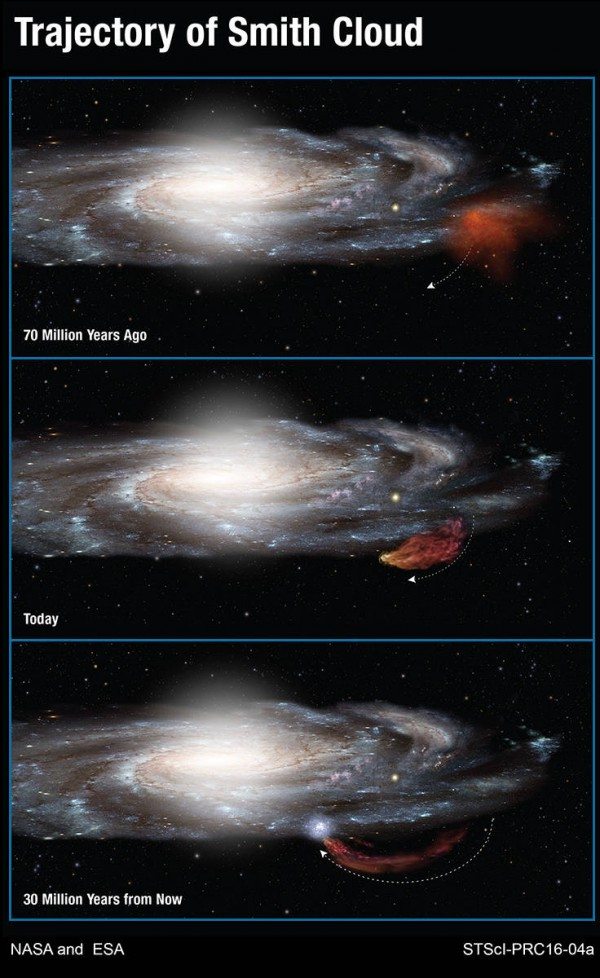 In particular, they looked for sulfur in the cloud which can absorb ultraviolet light, wavelengths that Hubble detectors are sensitive to. Sulfur, it turns out, is a good gauge of how many heavier elements reside in the cloud.

The astronomers found that the Smith Cloud is as rich in sulfur as the Milky Way’s outer disk, a region about 40,000 light-years from the galaxy’s center (about 15,000 light-years farther out than our sun and solar system). This means that the Smith Cloud was enriched by material from stars. This would not happen if it were pristine hydrogen from outside the galaxy, or if it were the remnant of a failed galaxy devoid of stars.

The cloud is an example of how the galaxy is changing with time,

It’s telling us that the Milky Way is a bubbling, very active place where gas can be thrown out of one part of the disk and then return back down into another.

So while this settles many questions about the Smith Cloud, like what it’s made of, how big it is and how fast it’s going, astronomers still don’t know what kicked it out of the galaxy in the first place One theory is that maybe a huge, passing clump of dark matter came through and churned it up spewing out of the plane of our galaxy, but they aren’t sure about that.

Our galaxy is recycling its gas through clouds, the Smith Cloud being one example, and will form stars in different places than before. Hubble’s measurements of the Smith Cloud are helping us to visualize how active the disks of galaxies are,

Oh and another thing that I may have forgotten to mention, the trajectory of the cloud was measured such that it’s plummeting back down towards our galaxy’s center — and us. The cloud does not pose any threat to our sun or solar system, but when it hits the core of our galaxy, a chain reaction of starbirth will be set off that should be spectacular to watch… In about 30 million years.

The team’s research appears in the Jan. 1, 2016, issue of The Astrophysical Journal Letters.