It’s been more than 8 months since New Horizons flew past Pluto, and we’re still learning new things from the images we’re getting back. Like last week, when NASA released a photo of one of Pluto’s mountain ranges, capped with methane ice.

The image shows the bright peaks of a 400-kilometer-long mountain range in a dark red region known as Cthulhu Regio. And these peaks might look like fresh fluffy snow, but based on the way they absorb infrared light, we can tell that they’re actually methane.

Like water on Earth, the methane on Pluto condenses and freezes at high altitudes, forming methane ice. And we’ve been finding the stuff all over Pluto.

Take a look at a picture, for example, of an area known as the Tartarus Dorsa region. Pluto’s surface looks all steep and scaly, with crack and cliffs hundreds of meters deep and those bumps are mostly made of methane, with a little bit of water. Which is weird. 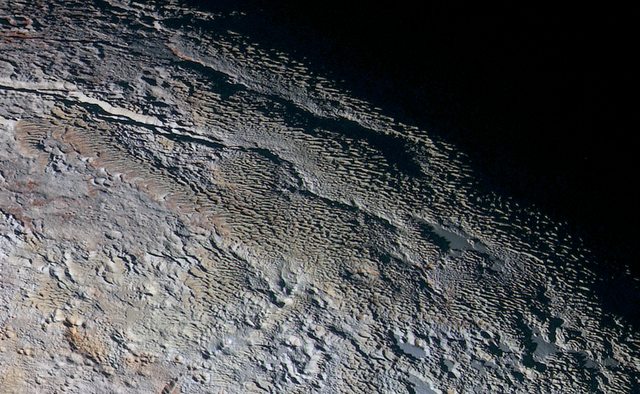 From what we know about methane, it should be too, well, mushy, to make such sharp cliffs. In fact, Pluto’s gravity should be able to squish these structures down flat in just a few decades.

So it’s possible that this isn’t just regular methane. Instead, the methane might have combined with the water to create what’s known as a clathrate. A clathrate is basically a cage, where one molecule surrounds another — and in this case, astronomers think there might be water surrounding the methane.

We haven’t directly observed clathrates on Pluto, but we do know that they’d be strong and stable enough to form Pluto’s steep cliffs. The clathrates would’ve formed very early in the solar system’s history, when it was a disk of gas and dust that was just starting to cool.

Astronomers think that there are methane clathrates all over the solar system, and they may have been some of the main building blocks of comets and other icy worlds. So by studying these molecule cages, we might be able to learn more about what it’s like on Pluto and about how the solar system formed.

Note: The resolution of the enhanced color image is about 680 meters per pixel. The image measures approximately 450 kilometers long by 225 kilometers wide. It was obtained by New Horizons at a range of approximately 33,900 kilometers from Pluto, about 45 minutes before the spacecraft’s closest approach to Pluto on July 14, 2015, NASA report.