There are myriad reasons why getting from Earth to Mars is hard, but chief among them are two 1) the massive amount of fuel needed and 2) a launch window that is limited to every 26 months, when the two planets are in optimal alignment. A couple of mathematicians have calculated a new path to Mars that solves both — and it’s far from a straight line.


More…
6 Fantastic Places That Are Hard To Believe Really Exist
UFO-Landing Site? A Giant Hole Baffles Scientists
Currently, the favored method for getting a spacecraft into orbit around Mars is the “Hohmann transfer.” After rocketing through the Earth’s atmosphere, the craft make a beeline for the Red Planet, barreling through space at high speeds. As it approaches Mars, its thrusters fire in the opposite direction — slamming on the brakes and swinging the craft into orbit.

The Hohmann transfer is a highly effective move — road-tested and reliable. But it is expensive and time specific. Launches are limited to a brief window when the orbit and rotation of Earth and Mars are just right. 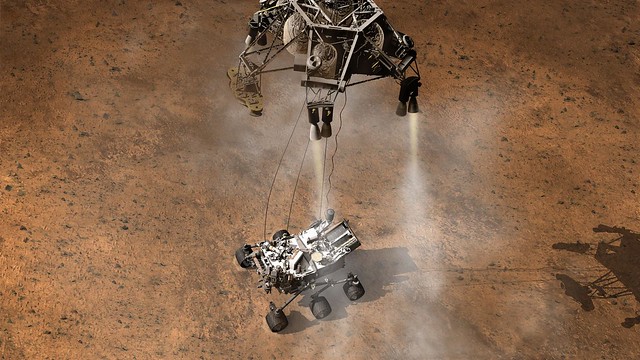 Ballistic capture could be used to reach Mars at a lower cost than current techniques. How does it work, and what are the drawbacks? (click to zoom)

Now it seems that the Hohmann transfer has been unseated by new research that shows a kinder, gentler way to get to Mars, anytime and without as many limitations: ballistic capture.

Ballistic capture, spacecrafts are “casually lobbed into a Mars-like orbit” flying ahead of the planet. The spacecraft sets its cruise slower than Mars’ revolutionary speed around the sun, and when the planet catches up with the spacecraft, its gravity snags it and pulls it into its orbit.

“It’s an eye-opener,” says James Green, director of NASA’s Planetary Science Division. “It could be a pretty big step for us and really save us resources and capability, which is always what we’re looking for.”

The relatively high orbital velocity of Mars presented a challenge to engineers working out how to use ballistic capture for Martian missions. The process also takes a long time, greatly increasing the length of missions over traditional braking.