What Would Your Life Be Like On A Donut Shape Planet?

Have you ever looked at a globe and thought, what if it had a hole in the middle? Me neither! But some researchers have. Because it turns out that planets don’t have to be shaped like spheres — or, what they really are, which are more like stretched-out spheres. Under the right conditions, a planet could end up shaped like a… donut! Or, what an astrophysicist might call a toroid.

It’s unlikely, but physics tells us that it is possible! And if such a world did form, life on a donut planet would definitely be… weird. And not just because you’d be walking around craving donuts all the time.

Planets generally form from spinning disks of gas and dust that get clumped together by gravity. And normally, that clump just gets bigger and bigger until it becomes mostly spherical. But based on computer simulations that physicists have put together, we know that if one of these clumps is spinning fast enough, it can form a ring instead.

Now, this ring wouldn’t be very stable. If it got hit by an asteroid, for example, it would break up into a bunch of particles, which would eventually re-form into something more stable, and less delicious, like a globe. And planets tend to stick around for a while — like, billions of years. So, odds are that a toroidal planet, if it did exist, would get hit by at least an asteroid or two. But it’s a big universe out there!

Out of all the planets in the whole universe, it’s possible that some of them are shaped like donuts! Life on a toroidal planet would be different from what we’re used to — but the most obvious differences have to do with the sky.

For one thing, if this planet had any moons, they might be orbiting in some pretty awesome ways, because gravity from a donut shape would be a lot more complicated than from a round little blob like Earth. The pull of Earth’s gravity is practically the same in every direction, so our moon can orbit in a relatively simple, well-balanced ellipse. 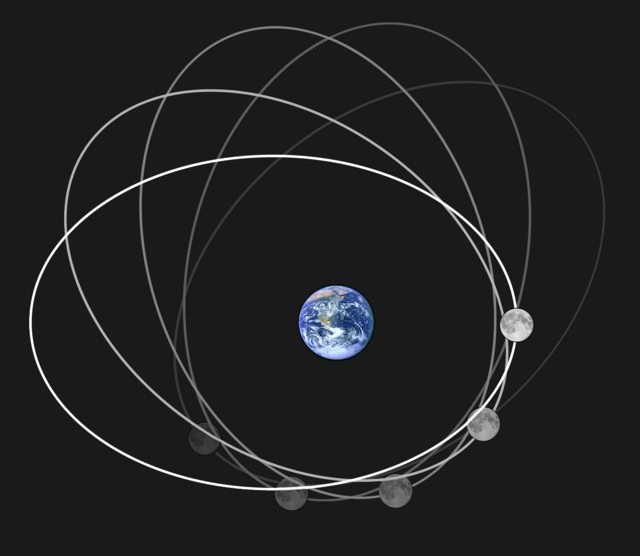 Moon orbit around the Earth.©Wikipedia.

A ring-shaped planet might have a moon like that too, with a circular or elliptical orbit around the outside of the ring.

But gravity from the donut would also be trying to pull the moon through the hole. Which means there are plenty of other options. One possibility is that its moons could have a figure 8-shaped orbit, where the moon would loop around one side of the toroid, through the hole in the middle, around the other side, and back through again. But it could also just move up and down, exactly in the middle of the hole in the ring, like some kind of perfectly balanced ping-pong ball. Which would be pretty cool to see.

Moon Orbit around a donut planet

Depending on where you were on the planet’s surface, though, the sky might feature more than just the sun, moon, and stars. If you were on the inside of your donut world, you’d also see the planet itself — the part of the ring opposite you. So if you wanted to watch a soccer game on the other side of the world? There’s no need for TV or the internet — just sit back with some beer and a telescope.

But life on a donut planet wouldn’t be all gorgeous skylines and free sports. The ring would also affect things as fundamental as your exposure to daylight, and your weather — though exactly how it would change those things would depend on the planet’s size, shape, and tilt.

The seasons could get slightly more Earth-like if the ring is tilted, though in certain seasons there would be places that experienced what we call midnight sun and polar night here on Earth. Of course, we still don’t know if donut planets actually exist, and even if they do, odds are we won’t be able to spot one any time soon.

But assuming you could find a spot with decent weather and a view of the other side of the ring, a donut planet seems like it would be a pretty nice place to retire.