The world’s most powerful sub-atomic particle accelerator – the Large Hadron Collider (LHC) at the European Organisation for Nuclear Research (Cern) in Geneva – has been given the go-ahead to re-start after being closed for two years of maintenance, now LHC is ready to explain one of the biggest mysteries of the Universe – the nature of dark matter.

The team at CERN began a number of repairs to the supercollider and the CERN’s accelerator complex generally. This included consolidating 10,000 superconducting magnet interconnections, which probably took more than an afternoon. CERN officials are hopeful that the repairs made over the last few years will allow it to run at 13 TeV (nearly twice the power it ran when it found the Higgs).

“With this new energy level, the LHC will open new horizons for physics and for future discoveries,” said earlier CERN Director-General Rolf Heuer. “I’m looking forward to seeing what nature has in store for us”.

Scientists expect that colliding two beams of opposing protons, each travelling at slightly less than the speed of light, will provide important insights into unknown fundamental realms of physics, particularly the nature of the mysterious dark matter and energy accounting for the vast bulk of the Universe, but has never been seen.

Dr. Mike Lamont says, “The physicists here at CERN hope that with the step up from eight TEV to 13 TEV, we will be able to explore a bit more of parameter space and that something all together brand new will show up.” Dr Lamont goes on to admit that they are dealing with a vast amount of raw power when using the LHC, and that, “Because of this we have to be very careful with it.” While scientists are anxious to see what will come of this latest LHC experiment, some are more fearful than others, such as Dr. Hawking.

Whether Dr. Hawking’s warning proves to be accurate is yet to be seen, but if there is one thing for sure it is that the possible results of the CERN research could be groundbreaking. While scientists at CERN are trying not to get their hopes up, they feel that winning a Nobel prize is not out of the question. CERN has plans to continue to upgrade their LHC for decades, testing new capabilities every few years. 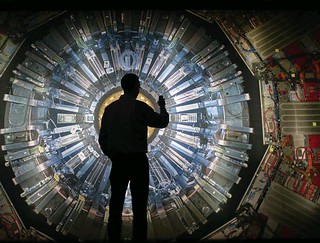 A visitor taking a photograph of a large backlit image of the Large Hadron Collider (LHC) at the Science Museum’s Collider exhibition.
Click to zoom

Bottom line: The LHC is a 27 km-circumference particle accelerator occupying a tunnel with seven major ongoing experiments on the Franco-Swiss border. Four are major experiments.

The ATLAS experiment (on the evidence for dark matter candidates in the universe), Compact Muon Solenoid (CMS) experiment (on extra dimensions and particles that could make up dark matter), the ALICE experiment (physics of matter at an infinitely small scale) and the LHCb experiment (to explore what happened after the Big Bang), are the four experiments.

The LHC is expected to start colliding small stuff again on March 23rd, but the process to reach 13 TeV is a slow one. No one wants to set the project back by jumping the gun with high energy levels. Full 13 TeV collisions are tentatively scheduled for the end of May or early June of 2015.

So what questions are you most excited for the LHC team to answer? What questions do you wish it could tackle?