A team of astronomers working at the Harvard-Smithsonian Center for Astrophysics have just found a stable planet inside in a three-star system.

Up to date, there are more than 1900 confirmed exoplanets (planets outside our solar system orbiting stars other than the sun) and 4696 kepler’ planets candidates. Many of these planets are multi-planets system, with two stars but finding a planet with three stars is incredibly rare, only four system with three stars were found. And this new one system is the closest of the four to us, giving us the opportunity to a better look than has been possible with the other finds.

The newly discovered planets, dubbed KELT-4Ab, is a hot Jupiter (planets whose characteristics are similar to Jupiter, but that have high surface temperatures) orbiting closely — every three days — to its host star KELT-A, while the star is circled by a nearby pair of stars, a very rare multi-star system located nearly 700 light-years away from us.

But what does triple-star actually mean? Standing on the surface of the KELT-4Ab, the two orbiting stars would appear as bright as the full moon does in our sky… This would be an amazing landscape, seemingly ripped straight from a sci-fi film.

Jason Eastman, the lead author of the paper published in The Astronomical Journal, sketched out a timeline for what that might look like: 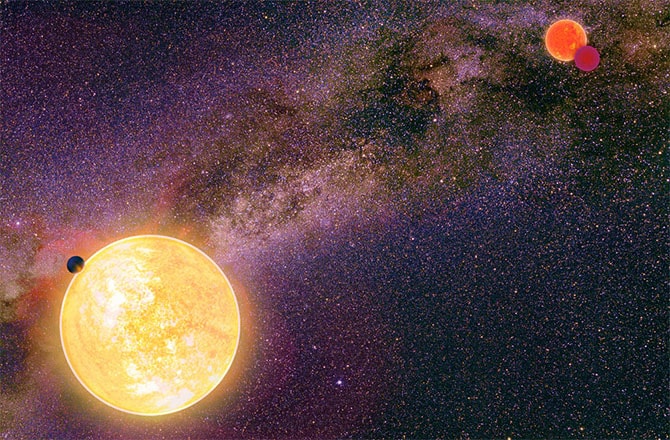 For the new finding, the team used two robotic telescopes that make up the Kilodegree Extremely Little Telescope (KELT) to glimpse the star system. Researchers have known about KELT system for a while but they thought it contained only a single star. After further research, they upped it to a binary system. And now, it seems to be a triple star system.

Due to its proximity to us, KELt system could help astronomers to better understand how triple-sun systems form in the first place.

Because it’s so close

we can visually study the orbits of all three stars and learn more about this poorly understood process to understand what role it may play in the formation and evolution of planets.