Jupiter’s Moon Europa Has No Shortage Of Salt

Jupiter’s icy moon Europe is probably the most fascinating moon in our solar system because its the most likely places to search for alien life.

With its oceans under the icy surface and the relatively young geological activity Europa has also some intriguing features seen from space including the outline of a dark red streaks found along cracks. These dark ‘drawings’ have puzzled scientists for decades, wondering what are they. A particular theory considering that these colors come from interactions with sulfur and magnesium on the moon’s surface.

But today, the space agency has just issued another hypothesis on the mystery dark material: it could be common sea salt! The salt in question come from the subsurface ocean, discolored by exposure to radiation.

The researchers created a simulated patch of the conditions on the surface of Europa including surface’ temperature (minus 173 ℃) and have used it to test various substances that could produce the famous dark colors. These materials were subjected to intense radiation, like that from Jupiter’s magnetic field.

After hours of exposure to this harsh environment, salt samples took on a yellow-brown coloration and measurement of their light spectrum showed a strong resemblance to what is seen on the frigid surface of Europa.

The color variations depend on the time of exposure to radiation, it could also help to determine the age of material observed on Europa.

If it’s just salt from the ocean below, that would be a simple and elegant solution for what the dark, mysterious material is. 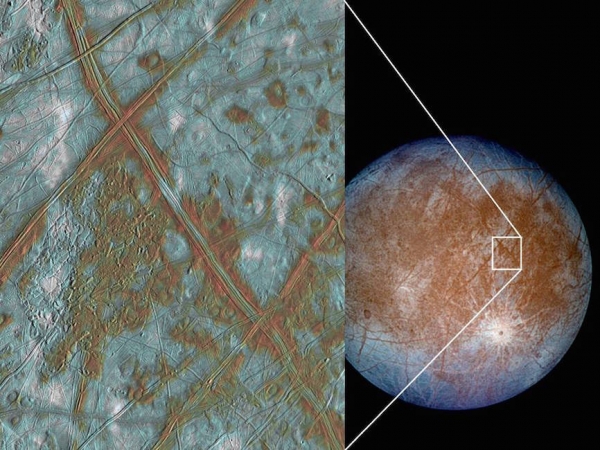 If the assumption is correct this would suggest an interaction between the ocean and its rocky seafloor, an important consideration in determining whether Europa has conditions that are suitable for life.

We have many questions about Europa, the most important and most difficult to answer being, is there life? Research like this is important because it focuses on questions we can definitively answer, like whether or not Europa is inhabitable.

Once we have those answers, we can tackle the bigger question about life in the ocean beneath Europa’s ice shell.

The theory can not be verified with certainty until it’ll be a future-mission visiting Europa. We will have to wait a bit, but for now it seems likely that Europe has no shortage of salt.

Note: JPL built and managed NASA’s Galileo mission for the agency’s Science Mission Directorate in Washington, and is developing a concept for a future mission to Europa. The California Institute of Technology in Pasadena, manages JPL for NASA.