Jupiter’s Moon Europa can Count Another Similarity with Earth

NASA agency has no official plans for a mission to the Jovian moon, whose icy crust covers a watery ocean in which life could theoretically exist.

But spurred by intense congressional interest and several recent discoveries, NASA is seeking ideas for instruments that could fly on a mission to Europa.

The possibilities range from a stripped-down probe that would zip past the moon, to a carefully designed Jupiter orbiter that would explore Europa over many years.

The groundswell of enthusiasm is likely to be bolstered by the latest big news, reported on 7 September.

Europa can count another similarity with Earth as Jupiter’s moon apparently has icy plate tectonics, a characteristic that would be exclusive to Europa and Earth. A new study, published in the journal Nature Geoscience, has shown evidence of icy plate tectonics beneath Europa’s surface. Already observed spouting water vapor from geysers, Europa is a leading candidate for celestial bodies that could host alien life.

Until now, researchers have had visual evidence of Europa’s icy crust expanding, but they could never find areas where the old crust was being destroyed to make room for the new.

Examining images of the moon taken by Nasa’s Galileo orbiter in the early 2000s, planetary geologists Simon Kattenhorn of the University of Idaho and Louise Prockter of the Johns Hopkins University Applied Physics Laboratory in Maryland, discovered some unusual geological boundaries.

The surface of Europa is slightly smaller than the Earth’s moon and is riddled with cracks and ridges. Blocks on the surface are known to have shifted in the same way blocks on either side of the San Andreas Fault move past each other on Earth.

On Earth, as new surface material forms at mid-ocean ridges, old material is destroyed at subduction zones, which are regions where two tectonic plates converge and overlap as one is forced under the other. However, despite the degree of extension evident on Europa’s surface, researchers had not been able to determine how the surface could accommodate all the new material.

Scientists studying Europa often reconstruct the moon’s surface blocks into their original configuration — as with a jigsaw puzzle — to get a picture of what the surface looked like before the disruption occurred. When Kattenhorn and Prockter rearranged the icy terrain in the images, they discovered that about 7,700 square miles (about 20,000 square kilometers) of the surface were missing in the moon’s high northern latitudes. 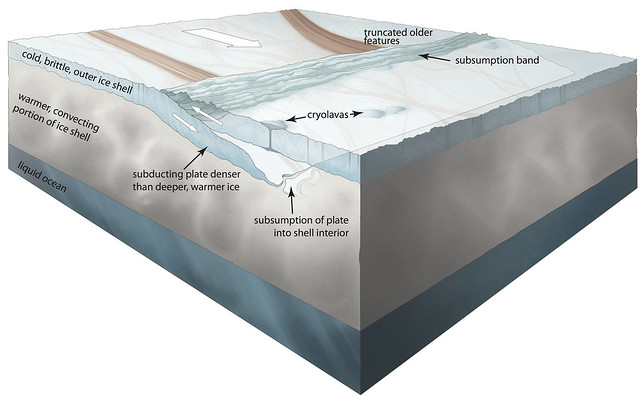 “It was very clear that you could reconstruct the original picture simply by moving plates around,” Kattenhorn said, comparing the duo’s approach to assembling a jigsaw puzzle. Further, there was a gap in this reconstructed picture, as if a large puzzle piece had fallen off the table. In a sense, that’s probably what did happen, Kattenhorn said.

“In this case, the big chunk had actually moved down underneath the adjacent plate and was forever lost, recycled into the interior” of Europa’s ice shell, he said. That chunk was indeed big, about the size of the state of Massachusetts, Kattenhorn added.

Kattenhorn and Prokter think this phenomenon of one plate sliding under another, which is known as subduction, is the most likely explanation for the disappearing puzzle piece. They cite several lines of supporting evidence, including potential “cryolavas” of water ice near the plate boundary. (On Earth, volcanism is common along subduction zones.)

An active system of plate tectonics could also explain two puzzling facts about Europa, Kattenhorn said: 1) why its surface is so young (less than 90 million years, as estimated by meteorite-impact rates), and 2) how the moon accommodates the creation of new ice on its shell, which has been observed previously. (Europa isn’t getting any bigger, so some process must be balancing out the production of new material.)

‘Not only does this discovery make it one of the most geologically interesting bodies in the solar system, it also implies two-way communication between the exterior and interior – a way to move material from the surface into the subsurface – a process which has significant implications for Europa’s potential as a habitable world.’

Some scientists said that plate tectonics were essential to how life evolved on Earth. The theory goes that tectonics replenished nutrients and helped to stabilise the Earth’s climate.

Jupiter’s moon’s shell is thought to be 12 to 19 miles (20 to 30 kilometres) thick to subducting plates probably plunge a mile below the surface, so it is unlikely that nutrients from the surface are carried down to the ocean quickly. But Dr Kattenhorn said that this could possibly happen over time.