A team of astronomers headed by Dr Nikku Madhusudhan of the Cambridge University’s Institute of Astronomy has found that the abundance of water vapor in the atmospheres of the three newly discovered hot Jupiters – HD 189733b, HD 209458b, and WASP-12b – is between ten and a thousand times less than what standard planet formation theories predict.

According to the core accretion theory of planet formation, planetary systems form from a huge disk of hydrogen gas and dust around a star. Over a period of a million years or more, the dust particles stick together, forming larger and larger grains. Eventually, the grains collect to form planetesimals which eventually coalesce into a planet.

At the same time, the gravity of the planet attracts an atmosphere of gas from the disk. The theory predicts that a planet’s most abundant element will be oxygen, which would take the form of water vapor in the atmosphere.

The three planets, known as HD 189733b, HD 209458b, and WASP-12b, are between 60 and 900 light-years away from Earth and were thought to be ideal candidates for detecting water vapor in their atmospheres because of their high temperatures where water turns into a measurable vapor.

These so-called “hot Jupiters” are so close to their star they have temperatures between 1,500 and 4,000 degrees Fahrenheit, however, the planets were found to have only one-tenth to one one-thousandth the amount of water predicted by standard planet-formation theories.

“Our water measurement in one of the planets, HD 209458b, is the highest-precision measurement of any chemical compound in a planet outside our solar system, and we can now say with much greater certainty than ever before that we’ve found water in an exoplanet,” said Nikku Madhusudhan of the Institute of Astronomy at the University of Cambridge, England. “However, the low water abundance we have found so far is quite astonishing.” 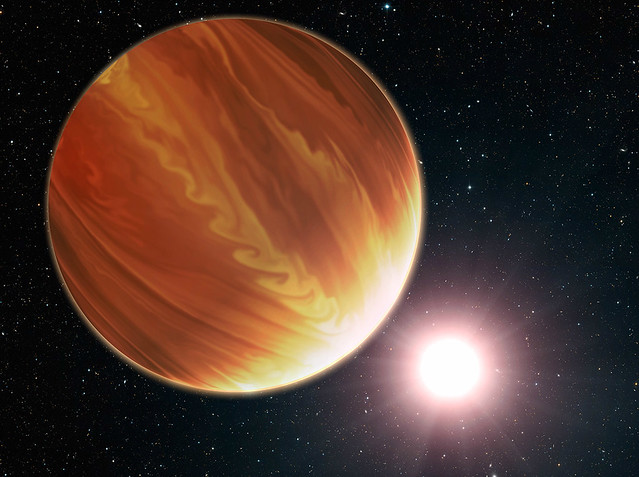 Artist’s conception of gas giant planet HD 209458b in the constellation Pegasus, which has less water vapor in its atmosphere than expected. Credit: NASA, ESA, G. Bacon (STScI) and N. Madhusudhan (UC) (click to zoom)

Madhusudhan, who led the research, said that this finding presents a major challenge to exoplanet theory. “It basically opens a whole can of worms in planet formation. We expected all these planets to have lots of water in them. We have to revisit planet formation and migration models of giant planets, especially “hot Jupiters,” and investigate how they’re formed.”

He emphasizes that these results may have major implications in the search for water in potentially habitable Earth-sized exoplanets. Instruments on future space telescopes may need to be designed with a higher sensitivity if target planets are drier than predicted.

“We should be prepared for much lower water abundances than predicted when looking at super-Earths (rocky planets that are several times the mass of Earth),” Madhusudhan said.

“There are so many things we still don’t know about exoplanets, so this opens up a new chapter in understanding how planets and solar systems form,” Drake Deming of the University of Maryland, said in the statement. “The problem is that we are assuming the water to be as abundant as in our own solar system. What our study has shown is that water features could be a lot weaker than our expectations.”

The findings are published July 24 in The Astrophysical Journal Letters.