This June, skywatchers will have an opportunity to observe in the western sky — less than an hour after sunset — the two brightest planets in the night sky, Venus the brightest planet, and Jupiter as they are going to converge for a jaw-dropping close encounter.

After sunset, Venus (approximately 20° above the horizon) and Jupiter appear visible in the west as they sink towards the horizon, Venus appeared 10 times brighter.

In recent days, the trajectories of the two planets are converging, in fact, every night in June, the separation between Venus and Jupiter will shrink visibly. So, on June 18, Venus will appears just 4° from Jupiter. On June 19, the crescent Moon joins the scene. On that night, something exciting happens: the Moon, Venus and Jupiter will form a bright isosceles triangle in the sunset sky. This is how most skywatchers in North America will see. One night later, on June 20, the vertices are rearranged forming another isosceles triangle.

Never has a geometry lesson been so beautiful.

The nights of June 19th and 20th, by the way, are good nights to look through a telescope. Even a small telescope will show you the fat crescent phase of Venus, the cloudtops and largest moons of Jupiter, and the rugged terrain of Earth’s own Moon. Swing your optics around the triangle for a fast-paced heavenly show.

The main event occurs on June 30 — the end of the month — on that night, the planets will meet at a closest approach distance of less than half a degree. Both can be hidden behind a little finger, they won’t be this close again until August 2016.

These events always provide an interesting talking point as people notice, perhaps for the first time, the two unusually bright lights in the sky and their daily motion against the background stars. 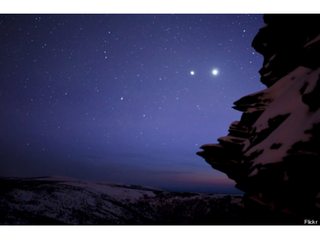