Is There Life On Kepler-452b The Most Earth-like Planet Ever Discovered?

NASA’ Former chief operating officer in Spain Carlos González Pintado says there could be life on Kepler-452b — the newly remarkable world discovered by NASA’ kepler mission — given its characteristics.

Kepler-452b is located 1,400 light-years away from us and it has some intriguing features very similar to our own blue planet.

Kepler 452b, which is about 60% larger in diameter than Earth, is located in the constellation Cygnus. Based on its size, scientists believe that Kepler-452b is a rocky world though this theory is based on statistical analysis and computer models not on direct evidence.

The discovery of Kepler-452b is a confirmation of something we already knew,

said Pintado in an interview.

mathematically speaking, there’s high possibility that could be intelligent life on kepler-452b.

The proportion of planets capable of supporting life may be much higher than scientists previously thought,

said Seth Shostak ~ one of the researchers involved in the discovery.

Personally, given the line of work I’m in, I think that’s a very encouraging thing.

What we know about Kepler-452b:

♦ It’s the smallest exoplanet discovered to date discovered orbiting in the habitable zone of a G2-class star just like the Earth and the Sun.

♦ Kepler-452b is 60 percent larger in diameter than Earth and is considered a super-Earth-size planet. It’s likely rocky.

♦ The planet is 5 percent farther from its parent star Kepler-452 than Earth is from the Sun.

♦ The Kepler-452 system is located 1,400 light-years away in the constellation Cygnus. 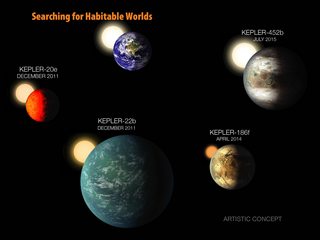 It remains unknown whether there is intelligent life on kepler-452b or not. “We have to find out,” Pintado added. To do this its necessary “a major technological leap.”

Jeffrey Coughlin who led the work on the new exoplanet’s catalogue said:

So I think this really gives you something to aim for. Kepler is the first step. We’re finding out if planets like Earth are common – and the answer seems, so far, to be yes.

We move in four dimensions and to get something extraordinary we have to find some ‘new’ dimensions. Some theorists believe that the universe must have eleven dimensions and we are at the dawn, we ‘discovered’ just four and nothing more. When we would find the other missing seven, maybe we’ll find something in the middle to break the barrier of speed of light.

NASA said in a news release:

In addition to Kepler-452b, another 521 planet candidates have been added to the mission’s checklist – including 12 candidates that appear to be one to two times as wide as Earth and orbit in their parent stars’ habitable zones. Nine of the stars are similar to our own sun in size and temperature.

Featured image: © Alpha-Element.
© Content from this site must be hyperlinked when used.