Is There An Exoplanet In Our Own Solar System?

We think that all planets revolve around the sun are born in our solar system but what we think may actually be wrong.

The Leiden’ astronomers Dr. Lucie Jílková and Simon Portegies suspect that the dwarf planet Sedna is actually originated from another star.

The dwarf planet Sedna was discovered on November 14, 2003. With a diameter of approximately 1,000 km, Sedna is relatively a large Kuiper belt object — only Pluto and Eris are larger. Sedna has a very long and elongated elliptical orbit around the sun, sometimes the distant point of closest approach to the Sun is 76 AU (76 times the Earth-Sun distance) but at the farthest point with its aphelion estimated at 937 AU (31 times Neptune’s distance). Sedna completes an orbit every 11,400 years — making it one of the most distant objects in the Solar System.

Astronomer Michael E. Brown, co-discoverer of Sedna believes that the location of Sedna is wrong. “Sedna should not be there,” says Brown. “The object is not close enough to the sun to be affected by it. Sedna is also not affected by other stars.”

“Sedna is clearly not a Kuiper Belt object, but the object also does not belong to the Oort cloud,” says Jilkova. “We have done simulations to find out how this planetoid took place on the edge of the solar system and how it ended up in this strange orbits.”

Now, astronomers think that more than 4 billion years ago, a possible encounters with another stars would lead to ice dwarfs being gravitationally captured into Sedna-like orbits.

The passing star would have been 80% more massive than the sun. It passed our solar system at a distance of less than 250 AU — 34 billion kilometres or 51 times Neptune’s distance. This means that the star were moving through the Kuiper Belt and affected the outer edge of the solar system.

“The passage of another star must have occurred before the so-called late heavy bombardment which occurred approximately four billion years ago during that interval a large number of asteroids apparently collided with the early terrestrial planets in the inner solar system,” said Jilkova.

The reconstruction of these near-collision show that about 2,000 planetesimals, including Sedna and 2012VP113 have moved into our solar system.

Dr. Portegies suspects that the passing star would itself have stolen hundreds of solar system’ ice dwarfs and hundreds more would have been hurled into interstellar space.

In that case, our stolen stones are probably lost to become free floating planetesimals due to the copious mass loss in the post-asymptotic giant branch phase of the host. 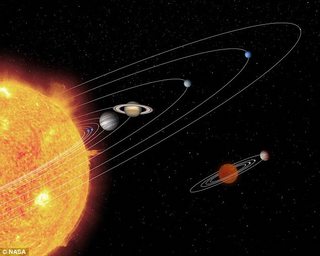 If we could show that Sedna-like objects have a different chemical make-up from the rest of the Kuiper belt, that would be convincing evidence that they were stolen from another star.

Understanding the origin of Sednitos and testing the theories for an outer planetary-mass object requires additional observations. The Gaia astrometric mission is expected to discover ∼ 50 objects in the outer Solar System.