Is the Search for Exoplanets is Futile? Gliese 581g a Big Disappointment

Since the first planet outside of our solar system was discovered in 1994, astronomers have been hunting for an elusive target: a rocky planet roughly the size of the Earth that orbits its star at a distance that would allow liquid water to persist on its surface. In 2010, exoplanet hunters announced that they’d potentially found just such a planet.

Twenty light-years away, orbiting the star Gliese 581, was a rocky planet thought to be three to four times the mass of the Earth, smack in the middle of the so-called “Goldilocks zone,” said the New York Times at the time.

Gliese 581g, as it became known, was our first candidate for an Earth-like planet—one that could potentially support life—in another solar system. Gliese 581g, and other planets that followed, have transformed our understanding of Earth’s place in the universe.

Now, a new study suggests that previous observations of this planet were entirely mistaken, and that the existence of the planet, as well as another belonging to the system, was an illusion caused by sunspots on the Gliese 581 star. The promising planets that caused so many to grow excited about habitable zone prospects may not actually exist. 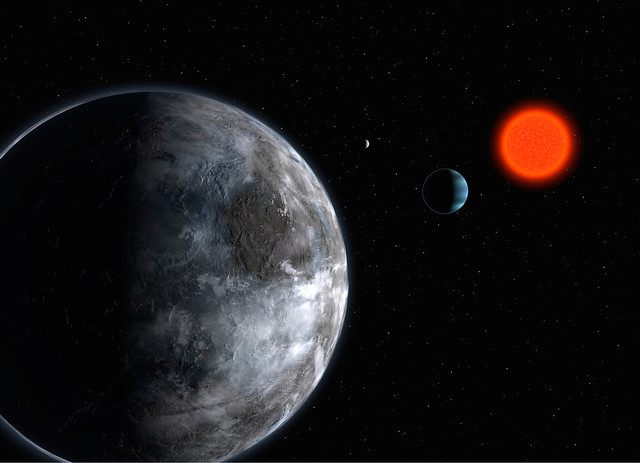 Paul Robertson at Pennsylvania State University led a team of astronomers to observe different regions of Gliese 581’s spectrum. The researchers saw sunspot-like regions rotating along with the star. According to Robertson, these regions look like planets.

But, according to a paper published in the latest edition of the journal Science, the wobbles detected by Butler and Vogt were real, but instead of being caused by a planet’s gravitational pull, they could be explained by activity within the star itself. Current researchers used a more accurate method of measuring shifts in the spectral signals released from distant astronomical objects. After correcting their observational data to allow for the star’s own magnetic activity and inter-stellar noise, the signals attributed to Gliese 581g and 581d disappeared.

The discovery raises questions about the recent slew of exoplanet excitement. It seems every week a new, possibly habitable exoplanet is discovered.

While astronomical techniques advance at a rapid rate and accuracy in observations improve with every new telescope or piece of equipment built, the discovery of planets many light years away is still a field shrouded in uncertainty.

Before we become too excited about possibilities, it might be necessary to step aside and let science take its course-observing, detecting, discovering, disproving and then observing again, until we are confident enough in the data to move forward.

University of British Columbia researcher Phil Gregory said that astronomers may pay more attention to all indicators of a star’s activity, even if it “sadly removes a potentially interesting planet near the habitable zone.”

At present, there have been 42 reports of potentially habitable planets, all of which are at least ten light years away from Earth. The question is: how many of them is real and not fake? Is the the current processes used in such missions are flawed or that the search for identifying these exoplanets is futile ?