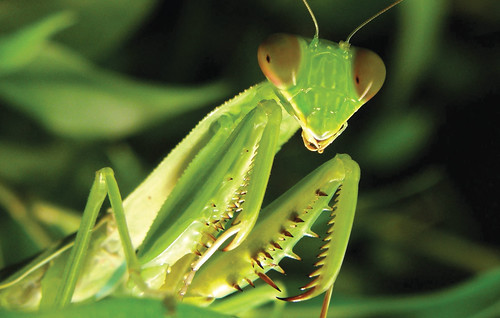 6. The mantis shrimp has 16 color receptive cones. To compare this, a dog only has two and humans only have three. Where we see a rainbow, a mantis shrimp sees thousands of different more colors. Also, its limbs move at a speed so quick it literally boils the water around it, creates a shockwave and even produces tiny bursts of light.

7. Most snails are hermaphrodites (having both male and female sex organs). So when snails have sex they fight with their penises until one of them stabs the other and gets it pregnant.

8. Dogs have a special system in their necks that’s allows the blood to circulate longer, so it cools down before reaching the brain. So they don’t overheat as easily.

9. Vampire bats drink half their weight in blood every day. If one bat is going hungry, another will regurgitate up blood for his buddy. If a bat is hungry and goes to a buddy and that buddy refuses, the rest of the colony will then punish that selfish bat when he can’t find any by refusing to help him. Vampire bats have a form of social justice, proving it’s not a human invention.

10. Due to living so deep in the sea (where fish populations are scarce), when a male anglerfish encounters any female anglerfish, he fuses his lips with her body wall and connects his circulatory system with hers, then slowly degrades over time to nothing but a pair of gonads hanging off of her and leeching her nutrients. Females can have more than one male do this at a time.