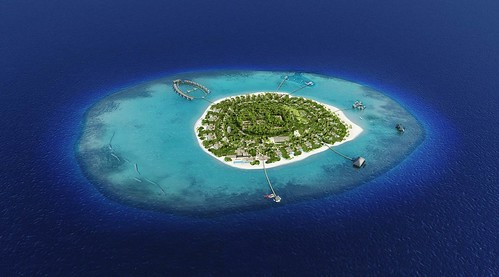 11. The flag of Bikini Atoll is symbolic of the islanders’ belief that a debt is still owed by the U.S. to the atoll because of the thermonuclear detonations on the islands. The three black stars in the upper right represent the three islands that were disfigured.

12. Venice Island was built on a foundation of tree trunks. About 1200 years later, those same trunks still support almost all of central Venice.

13. All Olympic curling stones are made from a rare type of granite that is only found on Craggy Isle, a tiny island in Scotland.

14. Charles Darwin and Joseph Hooker started the world’s first terraforming project on Ascension Island in 1850. The project has turned an arid volcanic wasteland into a self-sustaining and self-reproducing ecosystem made completely of foreign plants from all over the world.

15. Ilha da Queimada Grande is an island that is so densely populated by poisonous snakes that the Brazilian Navy has quarantined it and a biologist once said that when on the island you are “never more than three feet from death.”