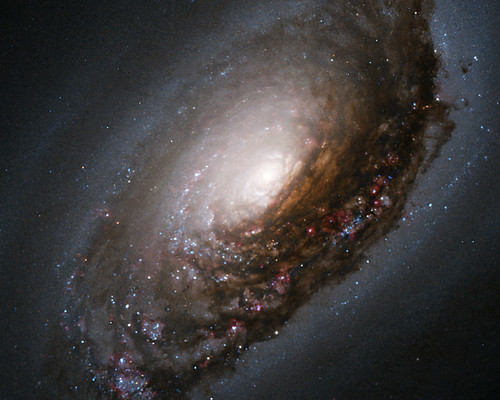 ☻ The strongest evidence for the presence of dark matter is provided by gravitational lensing studies of the bullet cluster. Collision of two galaxies was observed in this cluster, but it was astonishing that the galaxies merged together without any disaster, or the stars smashing into each other. This means that, there was some invisible gravitational field governing the stars of these galaxies.

☻ A dark matter halo surrounds the whole galaxy and extends beyond its edges. The Milky Way galaxy is enveloped by a much bigger halo than the actual galaxy, and is spherical in shape.

☻ Recent studies and observations seem to point toward a universe with a mixture of both hot and cold dark matter. The temperature determines the speed of the particles; hot particles move nearly at the speed of light. A good example is neutrinos. Neutrinos are weakly-interacting subatomic particles which do not carry an electric charge, hence, leaving them unaffected by electromagnetic forces. On the other hand, cold particles move much slower than hot particles. The hypothesis of the Peccei-Quinn theory in 1977 talks about ‘Axions’. According to this theory, this hypothetical particle should have very low mass, and could be a possible component of cold dark matter.