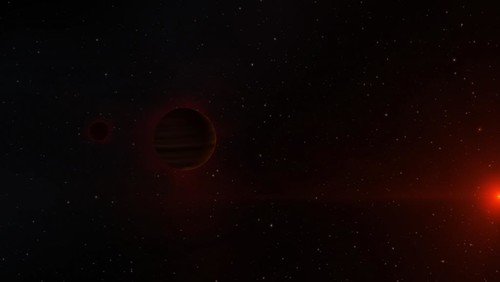 Brown dwarfs were earlier called black dwarfs, before the term ‘brown dwarf’ was coined by Jill Tarter, of the SETI (Search for Extraterrestrial Intelligence) Institute, in her 1975 PhD thesis. Contrary to their name, brown dwarfs appear to be deep red or magenta in color.

In the first few million years after their formation, both brown dwarfs as well as stars produce energy by the fusion of a rare isotope of hydrogen, known as deuterium. In case of stars, deuterium fusion is eventually replaced by hydrogen fusion when the core temperature increases, which however, does not happen in case of brown dwarfs.

The brown dwarfs undergo deuterium fusion for a relatively short period, after which they cool down and fade. As they are much cooler than stars, they emit radiation not in the visible spectrum, but at the infrared wavelengths.

This is one of the most distinguishing characteristics of these astrophysical objects.

Another characteristic feature of brown dwarfs is, traces of lithium can be found in their spectra. While stars burn their lithium within a little over 100 Myr, brown dwarfs never become hot enough to deplete their lithium. So, the detection of lithium in the atmosphere is an important criterion to determine whether the astrophysical object older than 100 Myr is a brown dwarf or a star.

Both brown dwarfs and stars cool with time. However, brown dwarfs become dark or dim when they cool down, while stars can maintain a minimum luminosity by sustaining steady fusion of hydrogen.

The twin brown dwarfs 2M 0939 are the dimmest brown dwarfs known so far. Their atmospheric temperature is 565 to 635 Kelvin.

According to the International Astronomical Union, an object with a mass above the minimum mass required for the thermonuclear fusion of deuterium can be considered a brown dwarf, while the objects that fail to meet this criterion are regarded as planets. This minimum mass is calculated to be 13 Jupiter mass.
WISE 1506+7027 is the closest known brown dwarf to our Solar System. This was discovered by Kevin Luhman, an associate professor of astronomy and astrophysics at Penn State University and a researcher in Penn State’s Center for Exoplanets and Habitable Worlds.

So far, hundreds of brown dwarfs have been discovered with the help of Infrared Sky Survey and other techniques. They hold special interest to astronomers and scientists, as many of them believe these substellar objects could help explain the ‘missing mass problem’ (also known as invisible dark matter), which is still a mystery to modern astronomy.