Some of seventeenth century’s greatest astronomers, including Hevelius — the father of lunar cartography — and Cassini, carefully documented the appearance of a new star in the skies in 1670. Hevelius described it as nova sub capite Cygni — a new star below the head of the Swan.

But now, according to an international group of astronomers led by Dr Tomasz Kamiński of ESO and the Max Planck Institute for Radio Astronomy in Bonn, Germany, that event that ‘erupted’ 345 years ago – was not an ordinary nova, but a much rarer event called luminous red nova.

Nova Vulpeculae 1670, as the nova is called, has struck great interest in modern astronomers. Kaminski stated that for over 300 years many thought this object was only a general nova, a thermonuclear explosion of a small white dwarf star.

Though, after further observation and careful analysis, they found the nova was hitherto unlike any other exploding star they have come across. When the light from Nova Vulpeculae 1670 first reached Earth, astronomers recorded that it was able to be seen with the naked eye, and varied in brightness and color for over two years.

After that time, it disappeared from view, reappearing twice before being gone forever from the views of Renaissance scientists. Although this spectacular nova was documented well, the dauntless astronomers of the time lacked sufficient technology to understand the mysterious essence of the peculiar riddle put forth in this galactic rarity.

However, using new telescopes, including the Apex and Effelsberg radio telescope, researchers were able to find out the chemical composition and the ratios of different isotopes in the gas – providing a detailed account of the makeup of the area and giving clues as to where the material might have come from. 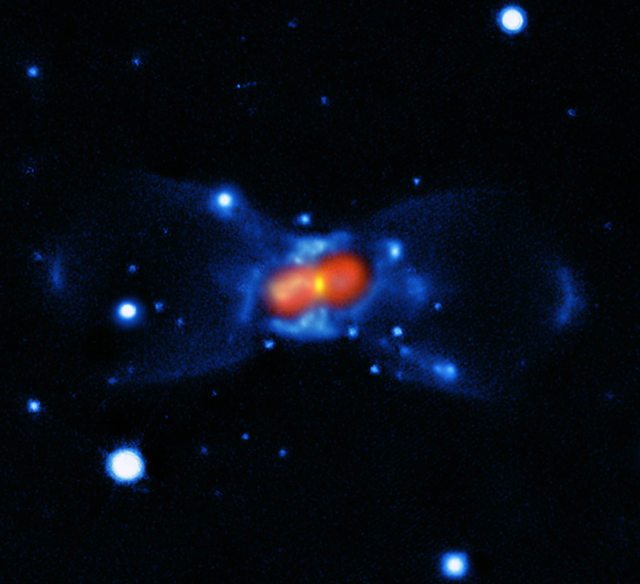 Kaminski said: “We have now probed the area with submillimetre and radio wavelengths. We have found that the surroundings of the remnant are bathed in a cool gas rich in molecules, with a very unusual chemical composition.”

Dr Kamiński and his colleagues created an extremely detailed account of the makeup of the area, which allowed an evaluation of where this material might have come from.

What the astronomers discovered was that the mass of the cool material was too great to be the product of a nova explosion, and in addition the isotope ratios the team measured around CK Vulpeculae were different to those expected from a nova.

But if it wasn’t a nova, then what was it? The answer is the luminous red nova – a spectacular collision between two stars, more brilliant than a nova, but less so than a supernova.

Red novaes are a very rare events in which stars explode due to a merger with another star, spewing material from the stellar interiors into space, eventually leaving behind only a faint remnant embedded in a cool environment, rich in molecules and dust. This newly recognized class of eruptive stars fits the profile of Nova Vul 1670 almost exactly.

“This kind of discovery is the most fun — something that is completely unexpected,” said Karl Menten from the Max Planck Institute.