How Rocky Planet Formed? Asteroid Vesta could have the Answer

Vesta, which has a 500km diameter and is located between Mars and Jupiter, is one of the largest known planet embryos and it came into existence at the same time as the Solar System.

Spurring scientific interest, NASA sent the Dawn spacecraft on Vesta’s orbit for one year between July 2011 and July 2012. Scientists have revealed that Nasa’s mission to the asteroid Vesta has raised fundamental questions about planet formation, including our planet Earth.

Data gathered by Dawn were analyzed by a team of researchers from EPFL as well as the Universities of Bern, Brittany (France) and Arizona (USA). Conclusion: the asteroid’s crust is almost three times thicker than expected.

The study does not only have implications for the structure of this celestial object, located between Mars and Jupiter. Their results also challenge a fundamental component in planet formation models, namely the composition of the original cloud of matter that aggregated together, heated, melted and then crystallized to form planets.

One of the researchers, Harold Clenet, explained that Vesta was found to be missing the mineral olivine on its surface. Olivine is the main component of planetary mantels and theoretically, there should have been large quantities on Vesta. 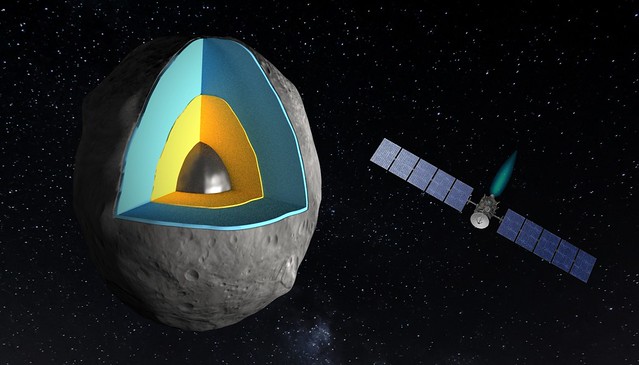 Scientists thought that a double meteorite impact that hit Vesta would have “dug” the asteroid’s southern pole to a depth of 80 km and catapulted large materials to the surface. But apparently these impacts weren’t strong enough to pierce through the curst to reach the asteroid’s mantle. This means that the asteroid’s crust was far thicker. The scientists said that The two impacts were so powerful that more than 5% of Earth’s meteorites come from Vesta.

The meteorites originating from Vesta and found on Earth confirm this since they generally lack Olivine, or contain only minute amounts compared to the amount observed in planetary mantles. Also, the spacecraft Dawn did not find olivine in the vicinity of the two impact craters.

“This means that the crust of the asteroid is not 30 km thick, as suggested by the models, but more than 80 km,” said Clenet.

Composition of planets These discoveries challenge models that describe the formation of Vesta, and consequently the formation of rocky planets in the Solar System, including planet Earth. Cooling theory and “re-melting” phenomena in the depths of previously solidified elements would also need to be reviewed.

As the scientist explained, “The crust might have been thickened by the formation of ‘plutons,’ that is: igneous rock intrusions, hundreds of meters large, some of which emerged to the surface.”ure–with a core, mantle and crust–making it an incredible laboratory for testing hypotheses and theories.

A more complex model of planet formation therefore has to be considered, one that takes into account not only the original composition of planets, but also their orbits, sizes, and related cooling times.

Vesta is the only known asteroid that has an Earth-like structure — with a core, mantle, and crust — making it an incredible laboratory for testing hypotheses and theories.